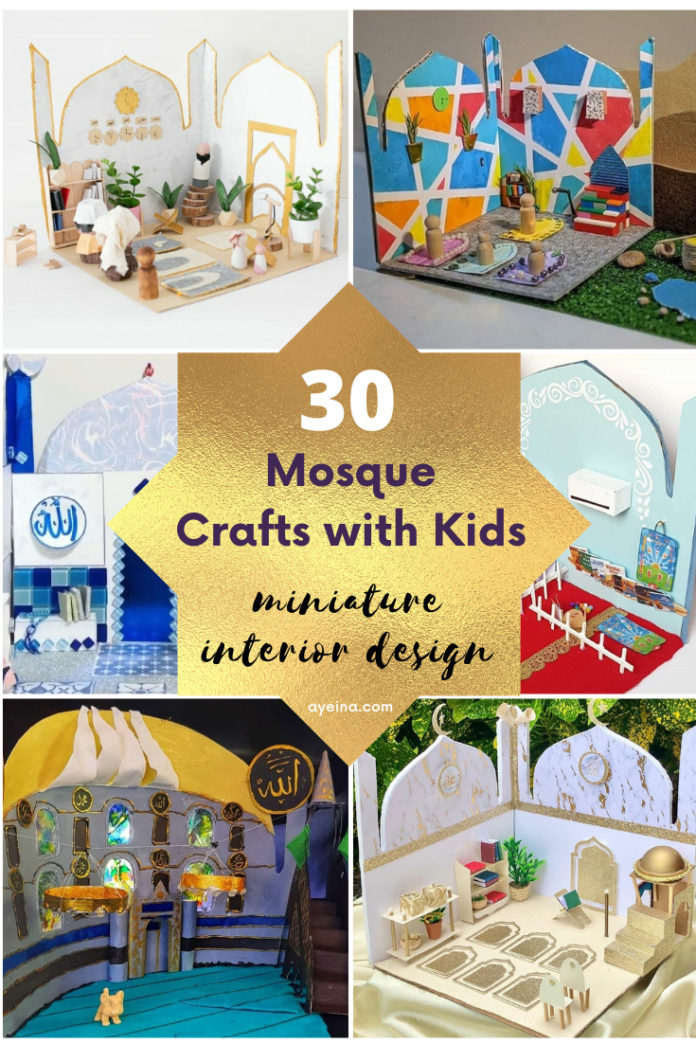 AYEINA hosted a “Design Your Own Masjid Contest” with a purpose of connecting kids back to the masajid – especially because they are closed for them during the pandemic 💔 Also, as a launch of JANNAH JOURNAL (hardcover version) – the cover of which is a fold-away cardboard mosque (alluding to the following hadith):

Muhammad ﷺ said: “Whoever builds a mosque for the sake of Allah, Allah will build something similar for him in Paradise.” [Hadith; Ibn Majah 736]

We wanted that kids (and even adults) can be encouraged to build a real masjid of their dreams one day for the sake of Allah. Once they envision their masjid on a mini scale, we pray that they are able to bring their vision to life some day too! bi’idhnillah.

Mosques are one of the very few places where we can feel peace and tranquility. But due to the pandemic, we all miss worshiping with the ummah from all over the world – people from different walks of life, different communities, young and old stand together shoulder to shoulder leaving behind their differences and bowing before one God, Allah.

Our special prize winner @brb_raisingkids said: “My ideal worship space would be an area that’s pleasing to the eye with very few distractions. Something that inspires tranquility.”

Winner in the Kids category @abid_shameem 10 year old girl made a masjid with pandemic in mind – hence a disinfecting sanitization chamber.

Adults category winner @drbaji said: “My vision for this project was an elegant design that would be pulled together by the different yet complimenting elements of paper. Almost everything is handmade (except the plastic dome) out of paper to showcase the beauty of this masjid.”

One mother said: “I intend to keep it out on display, so then my children get inspired to build a real one in future in Shaa Allah.”

@aishatharfa said: “He (her 7yr old son) proudly wired the sensors to light up the mosque when sound is detected.” See the video (from the embedded link) on how the masjid lights up with his adhaan!

@zendisaa said: “The masjid I created here is basically my dream masjid: the women’s section. I want a little kids area where the mommas can leave their kiddos for a while till they are done with their prayers.” Hence she put famous Islamic books and resources in the corner (including AYEINA’s Gratitude Journal for Kids and Jannah Journal with miniature fold-away masjid cover).

A mother said: “I’m a convert muslim living abroad, in a non-islamic country. There’s no mosque or community…We’re already winners because we spent time together and we made something special to us.”

A mother messaged that her 7 yr old has been praying more regularly past 2 days as a result. Not only that, her girl also memorized parts of salah because the imam is constantly leading the Salah in the masjid and all the LEGO toys have to pray behind him.

@abid_shameem said: “We have made “ZERO Energy” Eco Friendly Green Mosque. At a time when the world is passing through climate change crisis, the mosque demonstrates how sustainable developments can help in mitigating global warming. This Masjid maximizes natural ventilation aiming to reduce heat gain and minimize use of fossil fuel. The important feature of this mosque is that it’s managed by Hybrid Renewable Energy i.e. Solar – entire power supply is met through solar energy.
We Have made a Eco-friendly Masjid aiming to emphasize on sustainability and high reliance on green energy. In addition to the mosque’s dedicated areas (ablution, teaching), it boasts zero carbon on-site emissions, rainwater harvesting and solar panels. We have made small window to the Masjid to give natural ventilation..

@daniyamudassir19 said: “I used up almost 8 year old wedding invites that were lying around the house (to build the mosque with my husband)…It’s Our Masjid, cause it wasn’t just me who created this, But my better half was up there with me Alhumdulillah. We really had a good time making this at night time after he used to come home from work…So, this Masjid is dedicated to him.”

@jenny.molendyk said: “Since moving to Turkey, I have experienced some fairly significant moments within Turkish history (women with hijab kicked out from university…, an attempted coup to overthrow the government to mention a few). Most recently, the Hacia Sophia Museum returning to a mosque. For many Turks the importance of this moment was profound… It was there, standing in front of the mihrab that we all agreed we should make a mosque representing Hacia sophia.
Aspects that standout the most to me when I admire its beauty. These include the yellow dome (with fabric screens to cover some of the Christian imagery), the enormous circular plaques with the names of Allah, our beloved Prophet Muhammed (SAW), the beautiful stained glass windows, the gold paint and etching, the carved wooden minbar flying the green flags of the Ottoman, the freshly laid turquoise carpets, and even Gli, the resident cat that lives in the mosque.

Parents said that even though their kids were participating, it became a family affair and became an opportunity to bond with their children. Not only was it fun and memorable, but also educational as they spoke about the aspects and importance of mosques. Their masjid designs became an important part of their children’s toy basket as children took turns to play imam and muazzin.

Some built masajid with our youth in mind with an outdoor play area – a swing and a slide along with a football court. Some made foldable masjid where everything separates, folded and can be kept together for travel or easy storage. Some made durable mosques by sewing (like @rabeeamadeit) so kids can play with it day in and day out.

A woman thanked her husband and kids for letting her squeeze this crafting in her hectic schedule living in a joint fam of 28 members. She said it’s the first craft she has done after getting married and she has never been this happy and proud of herself.

A mother took this as an opportunity to educate her child that the sound of Adhan (Islamic call to prayer) is recited 24hours non-stop across the globe. This phenomenon happens because of the rotation of the earth.

A mother said about her kids: “They were enjoying the whole process while narrating different stories related to the masjid. I was quite surprised when I saw them spending the whole night to do this process.”

A participant said: “I’ve worked with my 4 year old being around and learning through a model is one of the best form of education. It was a team effort and team spirit that allowed each participant to complete and finish their beautiful masajid.”

LEGO mosques were famous in the contest. Perhaps next time, we can have a whole category of them bi’idhnillah.

A participant said that they learnt to appreciate these ‘pretty patterns’ (Islamic geometric art) on the mosque on a whole different level when they got their compasses and rulers out to try making their designs from scratch. The amount of mathematical precision these designs require is not a joke.

Can you spot our mini Juz Journals? They are not officially launched yet, so we are honoured to be a part of this mosque. May Allah make us all united in true faith. May Allah make us from one of those who work for and live for Islam. May Allah always protect our places of worship and may He tie our hearts and the hearts of our children to them until we meet Him.

Parents took this opportunity to teach about Islamic art, mosques around the world, wudu, adhaan, salah, jamaa’ah, duas, ahadith etc. And most importantly, importance of learning through play!

May Allah give us the ability to build, and more importantly, to populate the Masajid once again.

A boy said: “When I grow up, I want to build a real masjid” while another girl said to her brother: “Talha! When you grow up, you have to build a mosque and you should be the imam and I’ll pray behind you”.

25) Masjid AYEINA (as named by the participant)

A participant said that she was still a relatively new Muslim (less than a year) and her only exposure to mosques had been the small community mosques where she converted. And when she moved to a Muslim country, she saw mosques after mosques and each one had a large dome and towering minaret. She began to cry because she was so moved seeing not only the amount of mosques, but the beauty and the impact they had on the skyline.

@mummyonmymind said: “This little project took me right back to my days of doodling and modelling tiny spaces during my Architecture degree…. except instead of balsa wood, acrylic sheets and clay, I was using all of my kids craft items that I managed to scavenge and used my trusted hot glue gun to bring this together.”

@hadifaisal81 said: “I was amazed that masha Allah he was so excited and energetic even during weekdays after coming back from school tired, straight away he started adding details little by little…Everything created from scratch except mic (water bubble blower) and Printed geometric patterns used on wall and floor…when Shaheer said; “When I grow up, want to built real masjid” it made my day…Alhamdulillah.”

May Allah make us and our offsprings among those who establish prayers with khushu and on its time. And may He make our salah as beautiful as our masajid.

“The mosques of Allah are only to be maintained by those who believe in Allah and the Last Day and establish prayer and give zakah and do not fear except Allah, for it is expected that those will be of the guided.” [Quran; 9:18]

Many parents thought they won’t be able to find the time to participate in this contest as they are already under double stress – with work or losing jobs and home education/distance learning etc. But, Alhamdulillah there were hundreds of entries and even though the contest has ended now, you can also go to THIS LINK and download the free fold-away Masjid Printable to create your own mosque interior. FREE PRINTABLE CERTIFICATE for everyone who participated this year.

I offered if participants would like to sell their masterpieces on our platform (as an effort to help everyone be a winner – as winners with prizes are only 3), but most participants wanted to keep their hardwork close to their hearts and I loved that they already felt like winners…because some created these designs as a part of self-care (some said this is the first time they are actually crafting for themselves after years of marriage 💞), some bonded with their husbands to bring their masjid vision to life (never knowing that their husbands had crafting abilities too). Some weaved cherishable memories with their children. Some bonded with their siblings, friends and neighbours while some strengthened their relationships with their mothers by getting them involved in the process alhamdulillah. I loved how one participant told that her mother started crafting after YEARS because of this contest – although she loves crafting, it took a backseat with kids and grandkids…

Have you ever built a miniature masjid with your kids? We’d love to see.

Sunnahs of Expressing Love to Your Parents

ABOUT US
Founders of AYEINA – Two Muslim mom bloggers (commonly known as the “twin-ninjas”), countries apart, with hearts as one – Sisters by birth & best friends by choice. With the degree of Islamic Psychology, Masters in Business Administration, Advanced Arabic and Qur'anic studies, we hope to put our knowledge and art to use, hoping that Allaah accepts & you benefit in shaa Allaah.
Contact us: submissions@ayeina.com
FOLLOW US
© Copyright AYEINA 2021. All rights reserved.