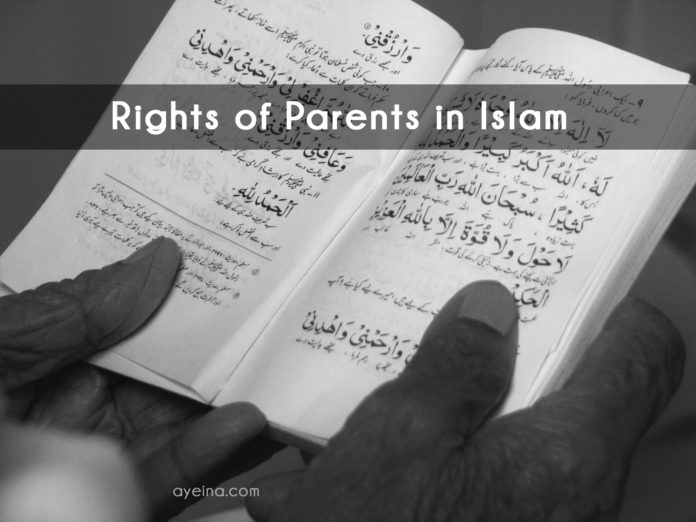 PREVIOUS: Sunnahs of Expressing Love to Your Child

(NOTE: Although the plural of “sunnah”  سنة in Arabic is “sunan” سنن and not sunnahs, but this is simply for ease of those who are not aware of the intricacies of the Arabic language and hence do not understand the word sunan whenever it’s written).

By Bashir Oyetunji (in collaboration with Team AYEINA)

Your parents are blessings that you must cherish. Little were you when they were fending for your needs so as to keep you sustained. No matter how minute their contributions in your life might be at this moment, they have their due rights as long as they are not calling towards anything Haram.

Rights of Parents According to the Quran and Sunnah:

And your Lord has decreed that you not worship except Him, and to parents, good treatment. Whether one or both of them reach old age with you, say not to them , “uff,” and do not repel them but speak to them a noble word. [Quran; 17:23]

Your mother probably went through all these difficulties when trying to sustain you as a child. The mother and child bond is something that’s in the fitrah (innate nature), and this is even witnessed in animals.

“The best of’ the deeds or deed is the (observance of) prayer at its proper time and kindness to the parents.” [Sahih Muslim 85 e]

3) Behave in a way that won’t displease them

The Messenger of Allah said: The major sins are: Associating others with Allah (Shirk), disobeying one’s parents, killing a soul (murder) and speaking falsely.'” [Sunan an-Nasa’i 4010]

Remember that Allah is the One who has commanded you to obey your parents. You must, however, not obey them to disobey Allah. When your parents command you to do something which is sinful to Allah such as shirk (disbelief in Allah) and other related things, then you are not obliged to obey them in this regard.

But if they endeavor to make you associate with Me that of which you have no knowledge, do not obey them but accompany them in world with appropriate kindness and follow the way of those who turn back to Me . Then to Me will be your return, and I will inform you about what you used to do. [QURAN; 31:15]

5) Show humility towards them

Respecting your parents, looking at them with affection, being humble with them, and talking to them with a gentle voice and with kind words are what lowering the wing of humility means…

Islam has prohibited arrogance and it will even be more disdained when directed to the parents. For this reason, you must show love to your parents by not behaving with them in a patronizing manner. Arrogance towards parents can easily creep into a child’s heart at some point in life, especially when Allah might endow the child with more financial means and knowledge than the parents. Always remember that you’ve come to this world through them.

A good way of showing love to your parents is to spend whatever you have on them. House them in a befitting residence as you’re capable of, feed them with the best of foods, clothe them, and take good care of them as you would take care of yourself.

Samina: “I was doing tafsir of Surah Saff verse 11 with the kids (age: 8, 6 and 5) and asked them how they can do Jihad with their nafs in this era? And as a child? 8yr old jumped up to say: through Hajj (because Muhammadﷺ said that a woman’s jihad is Hajj). That was a great point and then I said – similarly all of us can do the following transaction with Allah (referring to the verse 10 of Surah Saff): Me serving my parents and you serving yours! This is our Jihad 🌸 as mentioned in the hadith above.”

Always appreciate your parents through your words and actions.

Samina: “When I was reading ahadith and verses from this article to kids, I gave them an assignment to go hug their parents and say to them “JazakAllah khair” over something specific. Everyone mentioned what they would say – ranging from yummy food to being thankful for playing with them 💖 Once my daughter also wrote a gratitude letter to her baba (in “Alhamdulillah for series” gratitude journal for kids).”

It was narrated from ‘Abdullah bin ‘Amr that a man came to the Prophet and said: “I have come pledging to emigrate (Hijrah), and I have left my parents weeping.” He said: “Go back to them, and make them smile as you made them weep.” [Sunan an-Nasa’i 4163]

Excerpt from this post: “I remember the time my mum visited me after marriage – I found her lying in bed silently one day. I could tell something was wrong since she had covered her face with her hijab. As I uncovered her face, I saw tears rolling down her eyes. I asked with worry: “what happened Ama?” (While my mind raced everywhere whether I did something that may have hurt her). As the conversation proceeded, I found out that she has been feeling useless and like a burden because she was not doing anything around the house.
I said: “what do you mean you’re not doing anything?”
Isn’t playing with your grandchildren “doing”?
Isn’t spending time with your daughter “doing”?
Isn’t providing emotional support in a rough time “doing”?
Isn’t laughing with us all and bringing us so much joy “doing”?
Isn’t grabbing my hand and hugging me a little longer “doing”?
Isn’t having deep meaningful conversations “doing”?
Isn’t sharing our vulnerabilities to each other and understanding ourselves through each other “doing”?
There’s so much value in what no one sees. Without which I won’t be a sane human being. No one will value the amount of time you gave me, but I will. And those hugs and kisses are beyond the food that you may cook for me. And I held her face in my palms and said: “Ama, if there is one thing I want you to take with you from this vacation, it’s that you start finding your value in yourself beyond what you’ve believed in all along. Beyond what society told you where your value lies. Beyond work. Work. And more work.
She nodded her head as tears rolled down like a stream from her eyes. And I held my tears back because that’s where every mum finds her value until her body gives up and she’s left with no value as a human being…”

…When the Prophet came to her (Fatima رضي الله عنها‎), she stood up for him, took his hand, made him welcome, kissed him, and made him sit in her place… [Al-Adab Al-Mufrad 971]

Abusing one’s parents is one of the major sins. They (the hearers) said: Messenger of Allah (ﷺ), does a man abuse his parents too? He (the Holy Prophet (ﷺ)) replied: Yes, one abuses the father of another man, who in turn abuses his father. One abuses his mother and he in turn abuses his (the former’s) mother. [Muslim]

11) Connect with those they love (Relatives/Friends)

This is just the beauty of the child-parent love in Islam. The love you show your parents would not even be restricted to them alone; rather, it would extend to those they love.

‘Abdullah b. Umar reported Allah’s Apostle (ﷺ) as saying: The finest act of goodness is that a person should treat kindly the loved ones of his father. [Muslim]

The Prophet (ﷺ) said: “The maternal aunt holds the same status as the mother.” [Tirmidhi]

This answer on ISLAMQA explains the hadith more.

As mentioned in this post: “After everyone has taken their turns in reciting all the bedtime sunan before sleeping, we make dua for our parents and our kids make dua for us 💞 I even gave this task to my nieces to recite it for their parents and to remind their parents to make this dua for their parents. It indeed is a love circle. The love you show to your parents can be seen by your kids and they follow what you do. So becoming parents ourselves can give us better appreciation of our own parents naturally.
My husband and I are taking a parenting course nowadays and when I heard Sheikh Ala Elsayed say how predecessors would make dua (Quran 17:24 as mentioned in the embedded video) after each Salah and that parents should teach this dua to their children too, I knew we just had to include this in our bedtime routine as well.
It feels so good to hear it from your kids. My mum had tears in her eyes when my 5yr old told her that we have this in our night time routine. It’s been more than a month I think since we have been doing this every single night. If I forget, my 5yr old reminds us. I wonder how good a deceased parent would feel too when their child would make dua for them in this dunya, raising the parents’ ranks in aakhirah!”

You can even perform hajj for your parents.

See this beautiful act of Abu Huraira with his mother. Despite the fact that his mother was saying hateful things about the Prophet (ﷺ) whom he loved, he still didn’t behave badly with his mother. Rather, he was gentle with her and showed great love to her by asking that Allah’s Messenger (ﷺ) pray for her.

“…No obedience for evil deeds, obedience is required only in what is good.” [Bukhari]

Nevertheless, you must still not forget to be nice to them when correcting them or when declining their wrong orders. Try to let them see the reason why you would not follow them and, perhaps, they would also be guided by Allah through you to change. Try all good means to avoid their bad calls and to tell them that which is right. By correcting them nicely, they would at least accept your stand and wouldn’t invite you to their erroneous way.

Discussions about the parents is a lengthy one, but the crux of this piece is to show love to your parents by being dutiful to them. You must be of best conduct with them. Also, you should pray for them when they are alive and deceased. They are your hidden treasures, and, when you as a Muslim successfully imbibe all good lessons commanded as regards to them, you are treading the path of Jannah in shaa Allah.

It was narrated that Abu Usaid, Malik bin Rabi’ah, said: “While we were with the Prophet(ﷺ), a man from the Banu Salamah came to him and said: ” O messenger of Allah, is there anyway of honoring my parents that I can still do for them after they die?’ He said: “Yes offering the funeral prayer for them, praying for forgiveness for them, fulfilling their promises after their death, honoring their freinds and upholding the ties of kinship which you would not have were it nor for them.'” [Ibn Majah 3664]

Here are some FREE ebooks to read on the topic of parental rights and perhaps to teach your kids too (through your actions towards your parents and words (through books, Quran and ahadith)):

Piety towards Parents by Imam Jawzi

Co-author’s Bio: Bashir Oyetunji is a Muslim who loves to speak through his pen. He loves to tell stories and share experiences that’d impart minds and souls. Some of his inks are splashed at medium.com/@oyetunjibashir – He can be reached on social media here: Twitter & LinkedIn