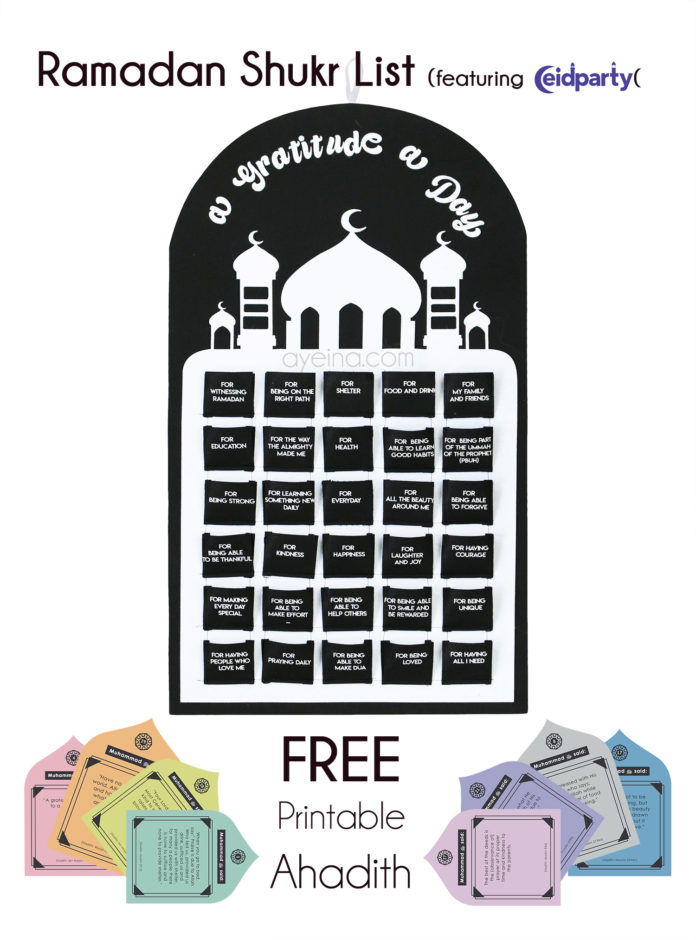 The blessed month – Ramadan 2021 is almost upon us. You may be preparing for Ramadan (and even Eid) already – buying gifts, organizing your home, planning etc. because you’d like to spend the blessed month collecting the barakah of it. So whatever you need for Ramadan or Eid, you can check Eid Party – a one-stop-shop for Ramadan and Eid. Since I’m working on their gratitude calendar this year (which is right up our alley with #AlhamdulillahForSeries), click the bold text for some ideas (mainly for kids) on what can you put inside the Ramadan Calendar pockets (I love ‘A Good Deed A Day’ Ramadan Calendar by Eid Party).

Gratitude is medicine for a heart devastated by the tragedy. It doesn’t change the scenery. It merely washes clean the glass you look through so you can clearly see the colours. If you do that enough, suggests psychology, gratitude might just become a habit.
What will that mean for you? It means, according to the research, that you increase your chances of psychologically surviving hard times and be happier in the good times. Processing a life experience through a grateful lens does not mean denying negative things. Instead, it means reframing a loss into potential gain.

I want you to hold your blessings close because you don’t know how long you’re going to hold them. Start with a gratitude a day and see the abundance in your life every day!

And when your Lord proclaimed, ‘If you are grateful, I will surely increase you…” [Quran 14:7]

‘A Gratitude a day‘ Ramadan Calendar with ‘A Hadith A Day’ FREE Printable:

Following is the list of authentic ahadith that I compiled based on the *A GRATITUDE A DAY* Ramadan calendar by Eid Party. I designed this with my 5-year-old in mind too as I wanted to do a hadith a day with her to benefit from the barakah of this month and have something relevant to talk about in terms of our spiritual development. I pray that these free HADITH CARDS help you too. You can download the cards for free (in pastel colours). All the reference links are embedded in each mentioned hadith so you can go read it in Arabic too and recheck the authenticity easily. The references are not mentioned in the printables to maximise the space so the text is not too small for you to read. If you won’t be printing the freebies, please come back to this article every day to read the whole hadith, or when narrating it to your child/children. If you benefit from this freebie bundle, please make dua for us (AYEINA and Eid Party – who helped us bring this post to life) and feel free to share it forward:

2) Alhamdulillah for being on the right path

The Messenger of Allah ﷺ said, “He who calls others to follow the Right Guidance will have a reward equal to the reward of those who follow him, without their reward being diminished in any respect on that account.” [Hadith; Riyad as-Salihin 1382]

Anas reported Allah’s Messenger ﷺ as saying: When you go to bed, say: “Praise is due to Allah Who fed us, provided us drink, sufficed us and provided us with shelter, for many a people there is none to suffice and none to provide shelter.” [Hadith; Muslim 2715]

4) Alhamdulillah for food and drink

5) Alhamdulillah for my family and friends

Abu Mas’ud reported Allah’s Messenger ﷺ as saying: “When a Muslim spends on his family seeking reward for it from Allah, it counts for him as sadaqah.” [Hadith; Muslim 1002a]

The Prophet ﷺ said, “The best among you (Muslims) are those who learn the Qur’an and teach it.” [Hadith; Bukhari 5027]

7) Alhamdulillah for the way Almighty made me

Allah’s Messenger ﷺ said: “Allah is pleased with His servant who says: Al-Hamdu lillah while taking a morsel of food and while drinking.” [Hadith; Muslim 2734a]

9) Alhamdulillah for being able to learn good habits

The Prophet ﷺ used to say “The best amongst you are those who have the best manners and character.” [Hadith; Bukhari 3559]

11) Alhamdulillah for being strong

Allah’s Messenger ﷺ said, “The strong is not the one who overcomes the people by his strength, but the strong is the one who controls himself while in anger.” [Hadith; Bukhari 6114]

12) Alhamdulillah for learning something new daily

Messenger of Allah ﷺ said: “A place the size of a whip in Paradise is better than this world and everything in it.” [Hadith; Ibn Majah 4330]

Messenger of Allah ﷺ said, “Whosoever begins the day feeling family security and good health; and possessing provision for his day is as though he possesed the whole world.” [Hadith; Riyad as-Salihin 510]

14) Alhamdulillah for all the beauty around me

The Prophet ﷺ said, “He who has, in his heart, an ant’s weight of arrogance will not enter Jannah.” Someone said: “A man likes to wear beautiful clothes and shoes?” Messenger of Allah ﷺ said, “Allah is Beautiful, He loves beauty. Arrogance means ridiculing and rejecting the Truth and despising people.” [HADITH; RIYAD AS-SALIHIN 611]

15) Alhamdulillah for being able to forgive

The Prophet ﷺ said: “Show mercy and you will be shown mercy. Forgive and Allah will forgive you. Woe to the vessels that catch words (i.e. the ears). Woe to those who persist and consciously continue in what they are doing.” [Hadith; Al-Adab Al-Mufrad 380]

16) Alhamdulillah for being able to be thankful

It was narrated that Thawban said: “When the Verse concerning silver and gold was revealed, they said: ‘What kind of wealth should we acquire?’ Umar said: ‘I will tell you about that.’ So he rode on his camel and caught up with the Prophet, and I followed him. He said: ‘O Messenger of Allah! what kind of wealth should we acquire?’ He said: ‘Let one of you acquire a thankful heart, a tongue that remembers Allah and a believing wife who will help him with regard to the Hereafter.’” [Hadith; Ibn Majah 12]

It was narrated from Abu Bakr that when the Prophet ﷺ heard news that made him happy, or for which one should be happy, he would fall down in prostratation (to show) gratitude to Allah, the Blessed and Exalted.” [Hadith; Ibn Majah 592]

19) Alhamdulillah for laughter and joy

20) Alhamdulillah for having courage

The Messenger of Allah ﷺ said: ‘The strong believer is better and more beloved to Allah than the weak believer, although both are good. Strive for that which will benefit you, seek the help of Allah, and do not feel helpless. If anything befalls you, do not say, “if only I had done such and such” rather say “Qaddara Allahu wa ma sha’a fa’ala (Allah has decreed and whatever he wills, He does).” For (saying) ‘If’ opens (the door) to the deeds of Satan.'” [Hadith; Ibn Majah 79]

the Messenger of Allah ﷺ said: “Love Allah for what He nourishes you with of His Blessings, love me due to the love of Allah, and love the people of my house due to love of me.” [Hadith; Tirmidhi 3789]

22) Alhamdulillah for being able to make effort

The Prophet ﷺ said: “He who finds it hard (to recite the Qur’an) will have a double reward.” [Hadith; Muslim 798b]

23) Alhamdulillah for being able to help others

24) Alhamdulillah for being able to smile and be rewarded

Messenger of Allah ﷺ said: “Every good is charity. Indeed among the good is to meet your brother with a smiling face, and to pour what is left in your bucket into the vessel of your brother.” [Hadith; Tirmidhi 1970]

25) Alhamdulillah for being unique

Narrated Abu Musa: It was said to the Prophet; “A man may love some people but he cannot catch up with their good deeds?” The Prophet ﷺ said, “Everyone will be with those whom he loves.” [Hadith; Bukhari 6170]

26) Alhamdulillah for having people who love me

the Messenger of Allah ﷺ observed: “The best of the deeds or deed is the (observance of) prayer at its proper time and kindness to the parents.” [Hadith; Muslim 85e]

28) Alhamdulillah for being able to make dua

Prophet ﷺ said: “Your Lord is Kind and Most Generous, and is too kind to let His slave, if he raises his hands to Him, bring them back empty.” [Hadith; Ibn Majah 3865]

29) Alhamdulillah for being loved

Sahl bin Sa’d As-Sa’idi (May Allah be pleased with him) reported: A man came to the Prophet ﷺ and said, “O Messenger of Allah, guide me to such an action which, if I do Allah will love me and the people will also love me.” He ﷺ said, “Have no desire for this world, Allah will love you; and have no desire for what people possess, and the people will love you.” [Hadith; Riyad as-Salihin 471]

30) Alhamdulillah for having all I need

“My Lord, help me to remember You, give thanks to You and worship You well.”

Ya Allah!
Accept all our duas and help us experience the best Ramadan!
Aameen

So tell me, what are you grateful for today? What is it that you’d like to be increased in? What would you say Alhamdulillah for? 👇