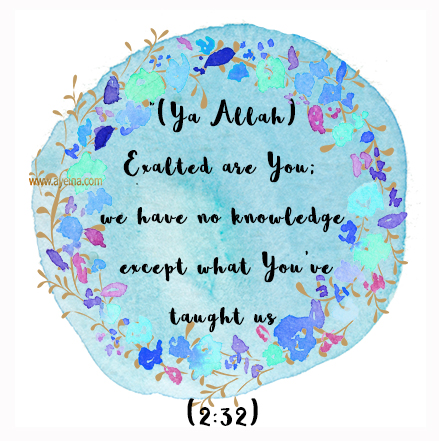 We only associate knowledge of deen (religion) to Allaah – thinking that it’s the only knowledge Allaah gave us (through Qur’an). As mentioned in the verses, Allaah taught Aadam (عليه السلام) names of everything. Defined everything to Him. And if Allaah wouldn’t have given us brains that were capable of thinking in such complex ways, we wouldn’t have gained knowledge of dunya and explored the world further more. Allaah could’ve given us brains like that of animals – who can function in the world normally too. They survive fine by eating, sleeping and playing. They don’t care about anything else. We were created with a higher purpose hence higher strengths. And eventually, a higher number of tests.

What a contrast between two kinds of beings who were given the same brain and a free will along with it. Both used it so differently. Previously, we saw how a change of heart can yield different results in different individuals. Same goes with the brain, soul, body, time, free will…we all have all of these but how we use it makes whole lotta difference.

P.S. I hope nobody is still thinking that Iblis (Shaitan) was once an angel. That is a popular Christian belief. Iblis was a Djinn (another creature that’s given free will by Allaah). Also, another misconception to clear is that Hawwa (Eve) wasn’t the one who strayed Aadam. Eve wasn’t evil and so wasn’t Aadam. Satan caused BOTH of them to slip because he was envious and jealousy still burns within him. May Allaah protect us from his incitements till our last breath.