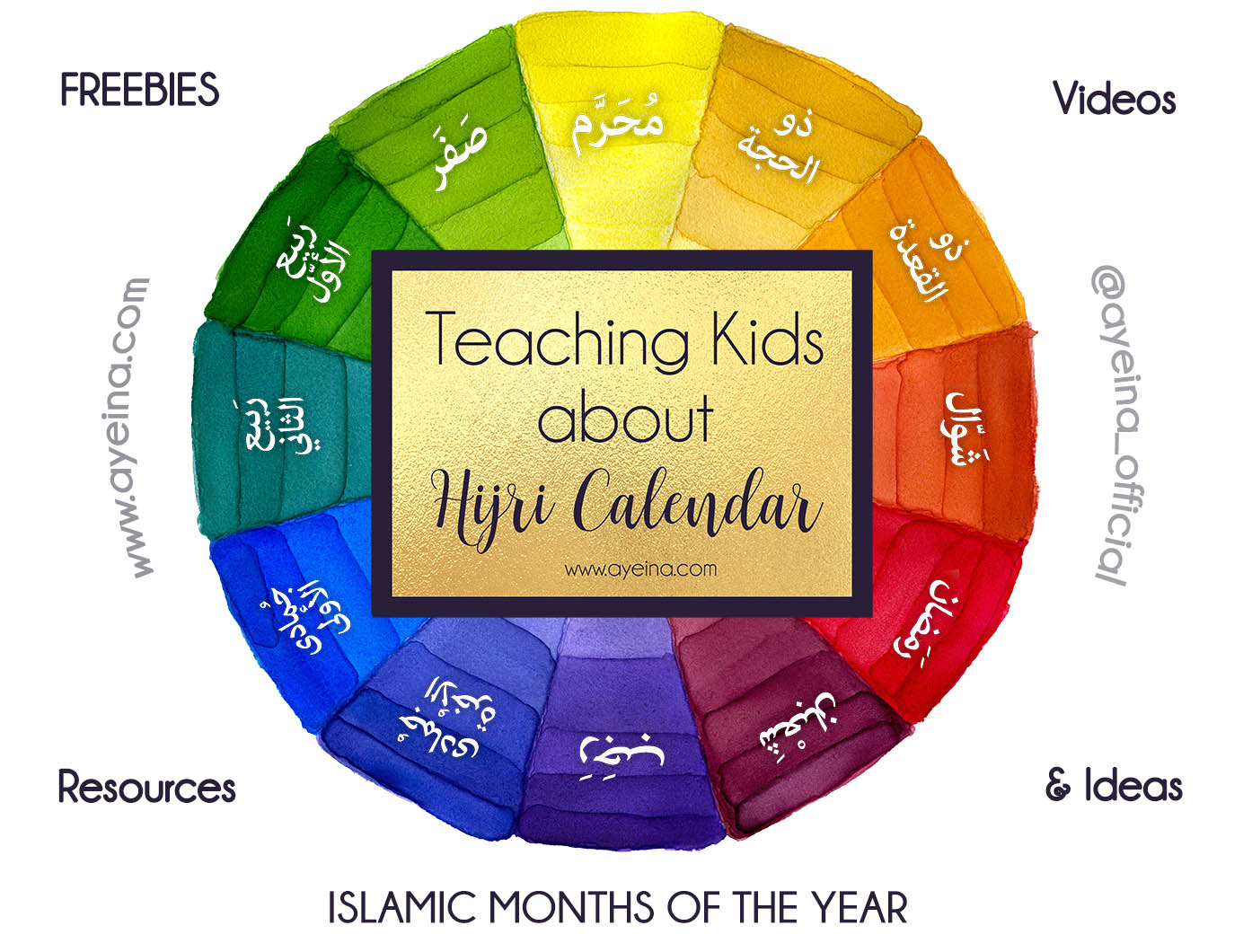 A calendar, as Wikipedia explains, is a system of organizing days for social, religious, commercial or administrative purposes. Wherein the time period is divided in days, weeks, months and years. These periods are usually synchronized with the cycle of moon or sun.

Islam, being the complete guidance of life, also takes into account the importance of having a time and calendar system. Allah mentions in the Holy Quran:

It is He who made the sun a shining light and the moon a derived light and determined for it phases – that you may know the number of years and account . Allah has not created this except in truth. He details the signs for a people who know.” [Quran, 10:5]

It is interesting to note that Allah has mentioned the phases of both the sun and the moon in respect of formation of calendars as both are used by mankind to mark their days, however speaking specifically of Islamic calendar, Allah mentions:

“Indeed, the number of months with Allah is twelve months in the register of Allah the day He created the heavens and the earth; of these, four are sacred. That is the correct religion, so do not wrong yourselves during them. And fight against the disbelievers collectively as they fight against you collectively. And know that Allah is with the righteous (who fear Him).” [Quran, 9: 36]

Therefore we find out that the Islamic, Muslim, or Hijri calendar:

1) Is a lunar calendar based on moon cycle

2) Whose epoch is the migration year of Muhammad ﷺ

3) Is majorly used to determine Islamic holidays and Rituals

5) Has 4 sacred Islamic months wherein fighting is prohibited; as identified by Prophet Muhammad ﷺ in a Hadith:

The Prophet (ﷺ) said. “(The division of time has turned to its original form which was current when Allah created the Heavens and the Earths. The year is of twelve months, out of which four months are sacred: Three are in succession Dhul-Qa’ da, Dhul-Hijja and Muharram, and (the fourth is) Rajab of (the tribe of) Mudar which comes between Jumadi-ath-Thaniyah and Sha ban.” [Bukhari]

Since Islamic calendar is associated with Islamic Rituals, a significant part of raising Practicing Muslim kids is teaching them about Islamic Months and its importance.

One of the main activities me and my kids did before the advent of Ramadan 2017 was learning the names of Islamic Months. My kids are younger than 4 years so our activities were mainly restricted to singing and crafting but here-under are several ways to teach Kids about Islamic Months.

Alhamdulillah, now we have so many music-free Islamic songs and materials available for our kids. The benefits are multiple – our kids can associate themselves with these songs way more than the ‘ba ba black sheep’ and they learn faster.

The three ways to use Islamic anasheed are:

1) Listen to the nasheed yourself and sing the nasheed to kids. Allowing and encouraging the child to sing along, and correcting them if they get it wrong. This will reinforce the names and sequence of months in their mind. You all can sing along while riding a car as well.

2) Let the child listen to the nasheed. Ideally, a mother should sing instead of putting the song on any device because kids learn speaking properly by looking at the movement of speaker’s mouth – which is not possible when the nasheed is being played on a device. My 3-year-old had been incorrectly saying Gajjab instead of Rajjab for long. But yes, anasheed on the device are a good alternative when the mothers are busy and want to take a break. (Please note that kids should be of screen-age as mentioned in THIS ARTICLE).

3) Perform the Nasheed. A physical movement connected to the song can help a lot in engaging a child with the rhymes. My kids sometime hold their hands and move in circle while singing their “Months in Islam”.

Another major way the kids get to learn and remember anything is – by seeing it. We created a FREE printable for you to download and print for your classroom or home which can help kids take a look and revise the names often.

You can download it by clicking on the image below: 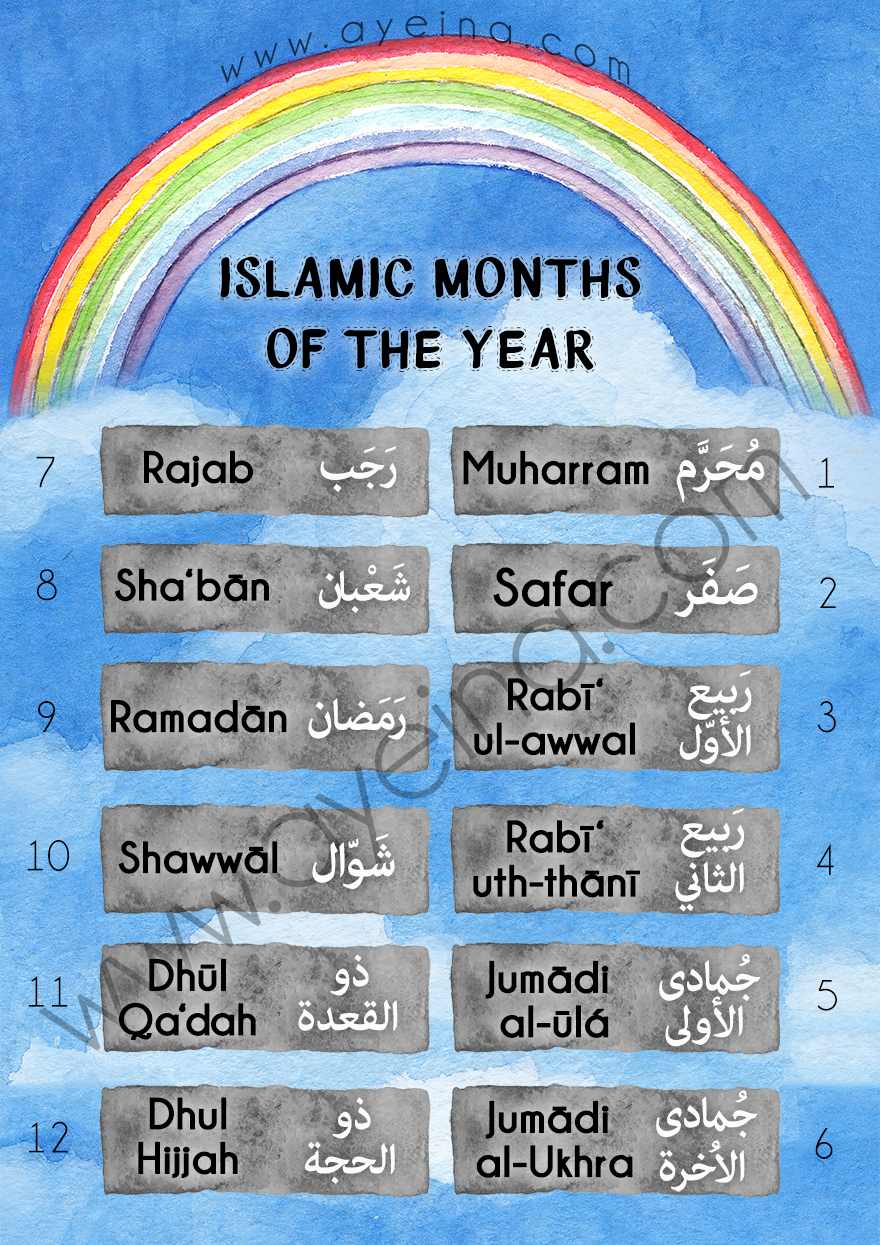 Some more amazing freebies on the topic are:

by Our Muslim Homeschool(who DIY-ed her own Hijri Calendar)

Activity Pack by Our Muslim Classroom

Asking kids to change dates from a velcro cloth Islamic Calendar (by Littl) every morning can also be a very educating experience for them in shaa Allah.

Hands on activities are also something that can keep the child interested and focused – and this interest and focus often results in a lifelong learning. You can even do a craft a month for a whole year so each time an Islamic month starts, kids can associate it with something memorable in shaa Allah. You can plan about them yourself in your own Islamic Planner (like Barakah Planner).

We created another printable for your kids to cut out and spin each month (minimal crafting required) – you can either make it a clock-like Wheel or a peek-a-boo one: 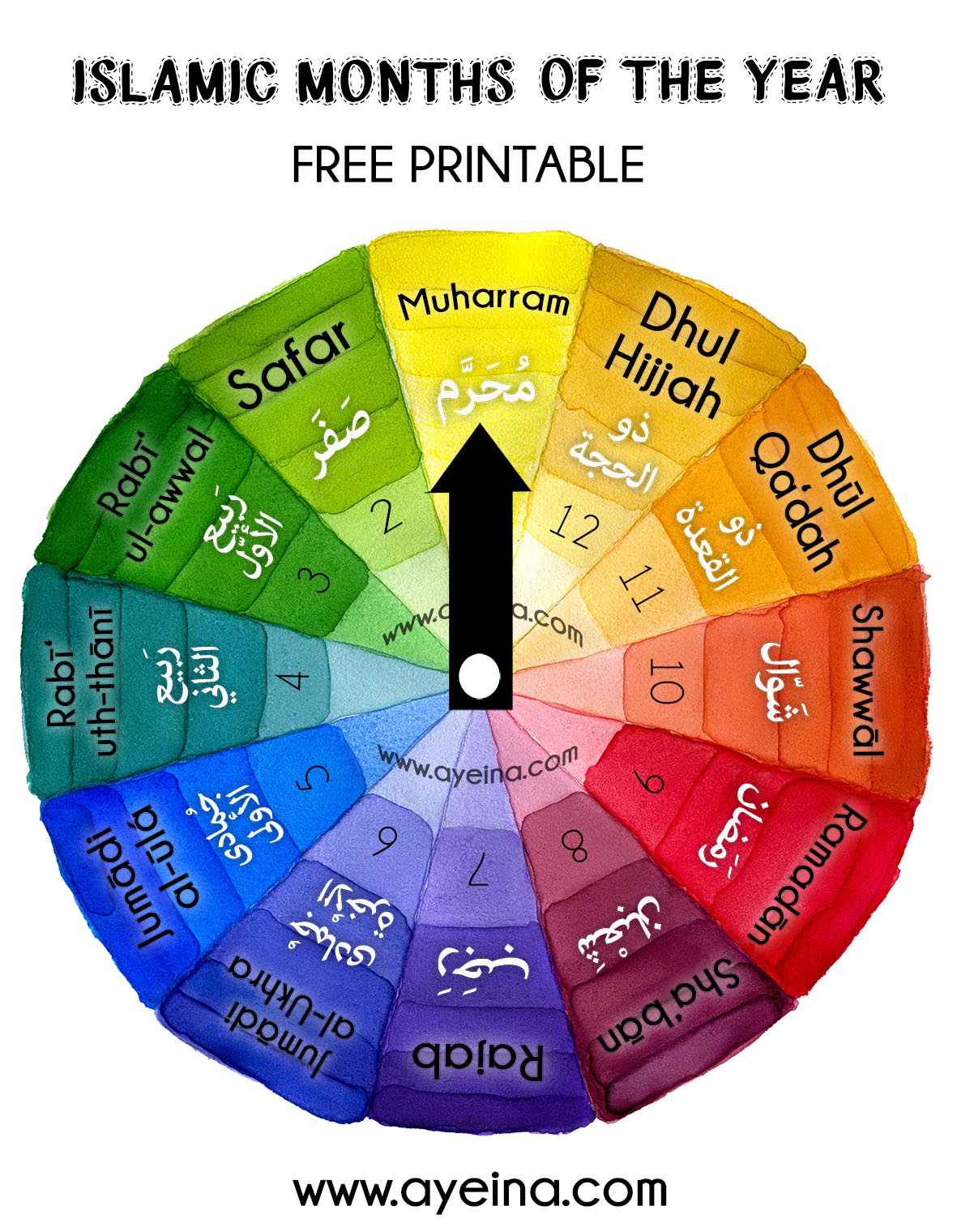 You can also make your own wheel calendar using basic materials like colors, cardstock & a thumb pin.

Few game ideas related to Islamic months can be:

2) Guessing the month – A game similar to Hedbanz can be made using Elastic bands and card stock. Where names of the months are printed on Card stock. Each player will wear a card bearing a name of a month which he wont be able to see but others can. The player will have to guess the month they are wearing by asking questions like:

3) Chasing game – Kids can make a circle in a way that one is in the middle and everyone else is walking round chanting the months. They all stop at dhul hijja and shout calendar calendar whats the month. Person in the middle shouts a random month and then they all run away and middle person chases. The person who is caught goes in the middle and the game starts again. Just simple fun things for kids who learn best through play!

4) Ball rolling game – In a class room setting where the children sit in a circle, the teacher rolls a ball to a child and they have to say the first month, child rolls ball to next child and they say second month and it goes on till the end.

Human being has an eternal love of tale and folklore, even Allah SWT in Quran tells stories to teach us lessons. Therefore, this should not be surprising that our own tiny human beings also share the same curiosity and interest.

Mothers can quench this thirst by telling the detailed accounts of why are the months named such and such? What are the Islamic historical events that occurred in those months? Why are certain months and days are of importance?

Part of the above has been beautifully represented in an infographic by Islamographic. Read some more details about the months in Islam in THIS BOOK (the book is great for details – although you may want to read THIS when it comes to the pages of Sha’baan as it discusses some controversial ideas that have a lot of difference of opinions among scholars). 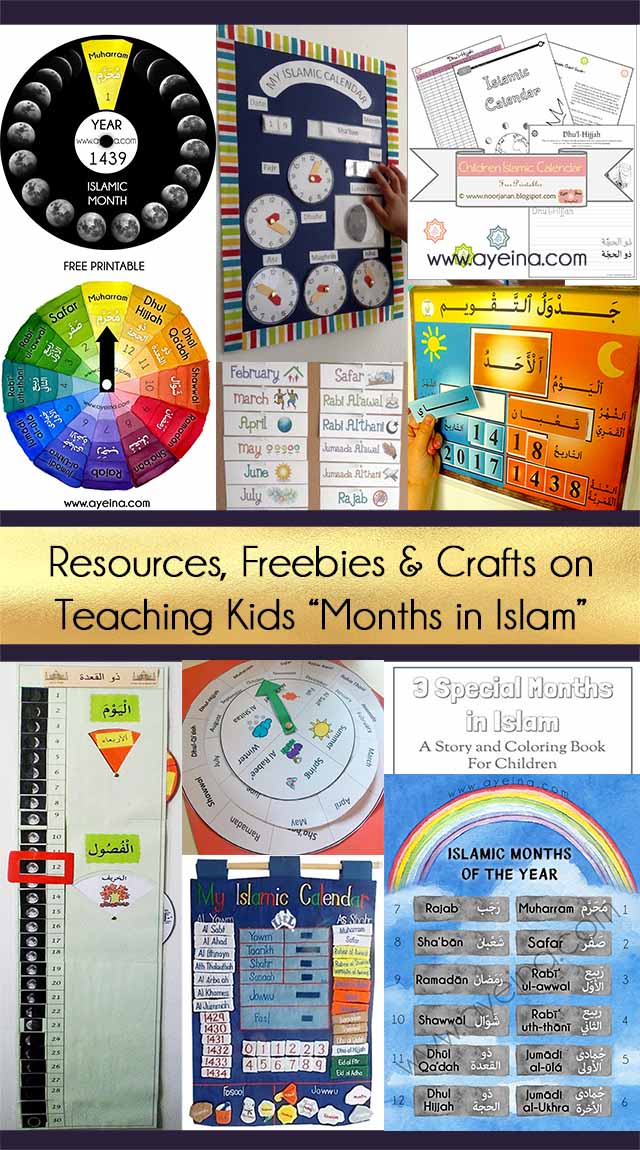 Co-author’s Bio: A Muslim by birth and choice, an Accountant by way of studies, an artist at heart, frugal housewife by profession and a blogger mom to two tots. Asbah blogs at amuslimmama.com

Hajj Crafts to Try with Kids this Dhul Hijja