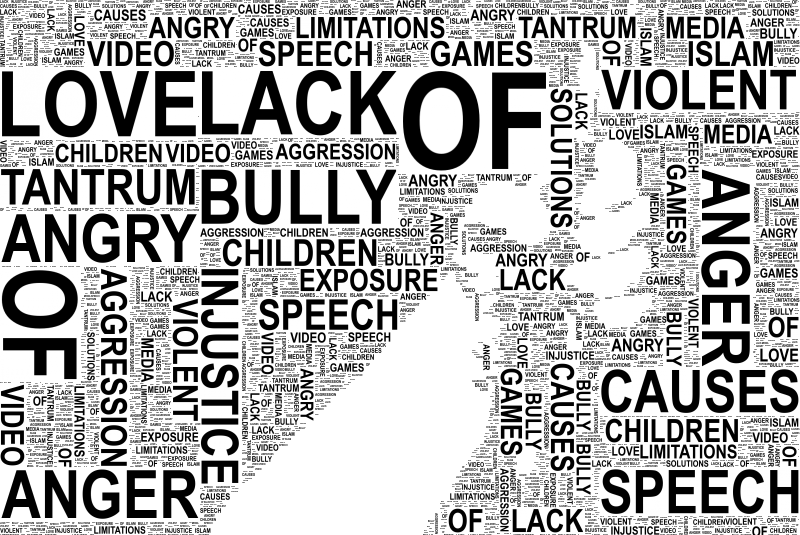 Allaah has placed the feeling of anger among His servants as a result of His ultimate wisdom, Mercy and as a test. It’s a feeling required to protect oneself against evil and to defend oneself, if utilized right. However, Allaah has set some limits to every feeling. Within those bounds they are appreciable, but if it crosses the limits set by Allaah, it can destroy oneself and others related as well.
Aggression can be defined as violent behavior, angry feelings or hostile action against another person, animal, etc.

It is very common that we hear our elders saying that the kids of their era were very obedient and respectful to them and showed lesser signs of aggression. It is indeed true but words alone are never helpful. Action is needed towards the issue. We are supposed to diagnose the ailment to eradicate it.

There is so much to write on this subject and you may find a lot of stuff on the internet, from the people in forms of advice etc. but to keep it short and brief and to keep reminding myself as well, I’m stating them briefly.

According to AACAP (American Academy of Child and Adolescent Psychiatry):
“Children who have several risk factors and show the following behaviors should be carefully evaluated:
• Intense anger
• Frequent loss of temper or blow-ups
• Extreme irritability
• Extreme impulsiveness
• Becoming easily frustrated”

Often when the parents represent an abusive behavior, it gets reflected in the child as kids do more of what they see than what you tell them to.

Parents are the very first role models for kids and as kids look up to them, they should act in the most prescribed way. They should be an example of our beloved Prophet Muhammad (PBUH) to raise an ummah like the sahaaba.

“Indeed in the Messenger of Allah (Muhammad) you have a good example to follow for him who hopes in (the Meeting with) Allah and the Last Day and remembers Allah much” {33:21}

And parents should expose their kids to sahaabas and the prophets. They should inculcate love for them in their hearts with their stories. As Prophet Muhammad (PBUH) said,

Kids who live in a joint family or who have bigger spectrum of exposure to the world outside their parents; be it peers or relatives, tend to gain more role models out of them all.

How to manage?
We all need to work as an ummah. We are not only supposed to amend the personalities of our children alone, but children of the ummah as well and in return we get a reward in this world and the next.

Nowadays media exposure is widely prevalent with the existence of TV in every other home. Not even villages are free from this epidemic. There are endless supplies of pictorial violence, injustice which includes:
i. Cartoons
ii. Movies
iii. Dramas
iv. Wrestling
v. News etc.

How to manage?
Limit media exposure as much as possible.

“Man’s feet will not move on the Day of Resurrection before he is asked about his life, how did he consume it, his knowledge, what did he do with it, his wealth, how did he earn it and how did he dispose of it, and about his body, how did he wear it out.” [Riyad as-Salihin]

Usually kids, who find no better words to express themselves, show irritation.

How to manage?
Parents should encourage more vocabulary and help them get comfortable with their feelings and expressing them. Avoid phrases like “boys don’t cry” or “big girls don’t cry”. Let them express in a healthy way. And if they can’t speak, show them ways and signs to express themselves by talking to them. Because even if they can not speak, they still get most of you.

b. Lack of Love

Lack of love and intolerance from the parents make the kids feel deprived in that tender age. The age that only thrives on this nutrient of love. Prolonged abandonment makes the kid feel frustrated and fight their way to achieve their parents’ attention.

How to manage?
Parents should give attention in order to make the kids feel loved and appreciated for the good they do and stop then with love for the bad that they do.

…He who does not show mercy (towards his children), no mercy would be shown to him. [Muslim]

Excessive violent video games and their indulgence is one major cause.
Playing violent video games can increase aggressive thoughts, feelings and behavior in real life, according to two new studies. Violent video games may be more harmful than violent television and movies because they are interactive and engrossing, and they sometimes even require that the person playing identify with the aggressor.

The Prophet, may Allah bless him and grant him peace, said, “A believer is not a defamer nor a curser nor coarse nor obscene.”

Video games come with an ESRB rating, specifying suitable age groups. So parents need to keep an eye on what sort of games their kids are playing and even then, a limit on the period of indulgence need to be put. Give them better replacements – other intellectual and interactive games. And even better, fun outdoor activities where they can direct their energies into something positive.

Kids who feel pressurized and are ill-treated by their peers, develop rage after a lot of exposure from such environment. Sometimes, the oppressed turns out to be the oppressor. And if they are weak to fight back, they show aggression in other areas of life. Like harming themselves or the weaker ones.

How to manage?
Such kids need support from parents and teachers. Teachers need to confront the bullying kids and parents need to counsel their kids and ask about their activities and challenges in school. They should also report the problems to the teachers and school authorities.

Unjust treatment among siblings is yet another major cause of aggression. This usually arise from the lack of communication among parents and children.

How to manage?
Parents need to encourage communication from children. They should make them feel loved and deal with them with patience and consistency since not every kid is same. Parents of young kids should make realistic expectations and bear with patience for a better reward.

“Be mindful of your obligation to Allah and do justice in respect of your children.” [Al-Bukhari and Muslim]