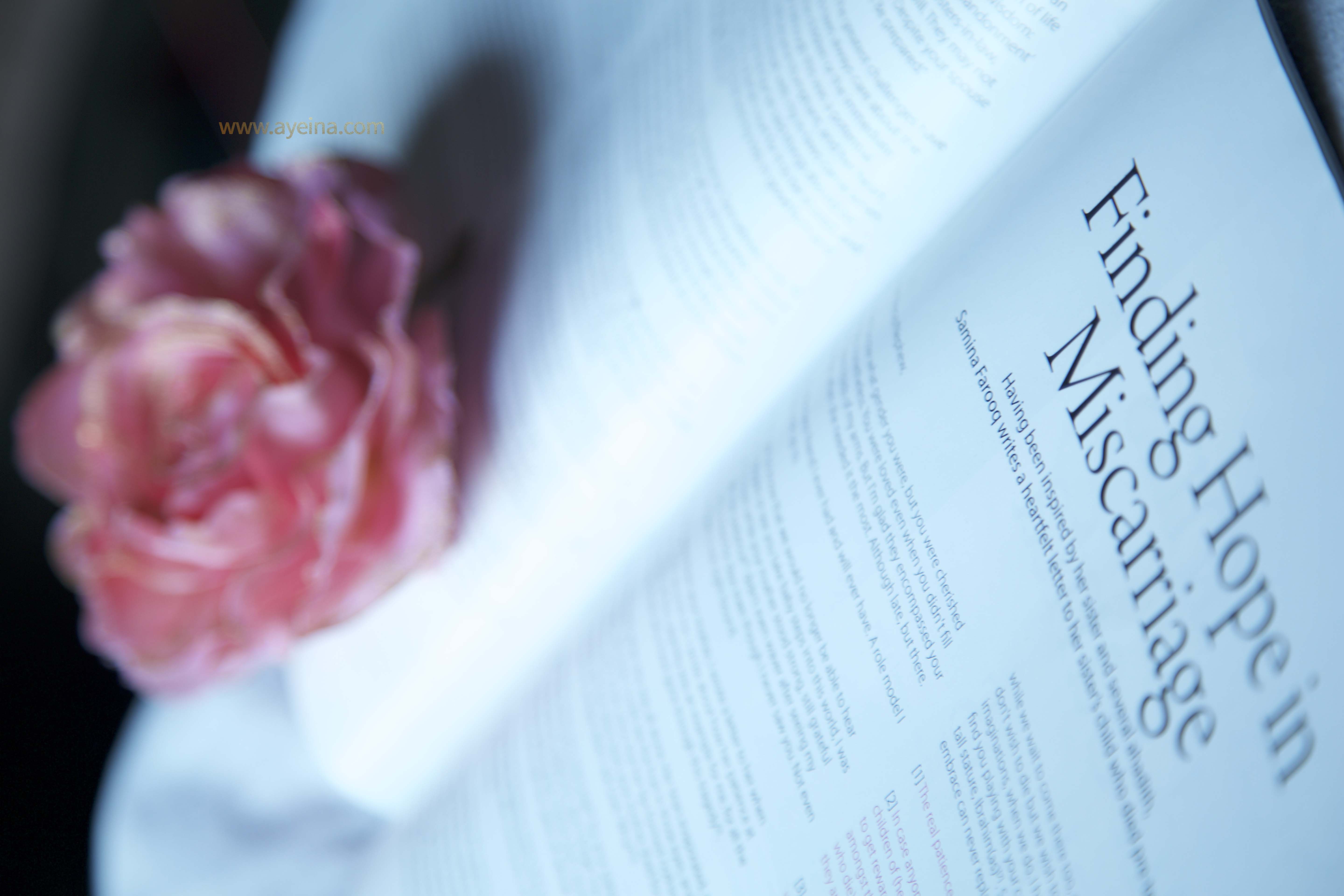 “…No Muslim is afflicted with hurt caused by disease or some other inconvenience, but that Allah will remove his sins as a tree sheds its leaves.” [Bukhari]

I was living in Alhuda’s hostel back then when this happened…My sister used to send me washed clothes so I wouldn’t have to wash them and can completely concentrate on my Qur’anic studies instead. My cousin (who was also my course mate for Taleem-ul-Quran) used to deliver those packages on her behalf when my sister wasn’t able to come visit me.

That day my cousin told me that I had a letter in one of my clothes. We used to write letters to each other as I was in a state of digital detoxification. We were not allowed to use mobiles etc. inside the hostel. So we would exchange letters. There is something in hand-written notes. They hit closer to home, connecting hearts with something tangible. Something personal.

I was standing beside my cupboard that day when I opened her letter that broke the news to me. The baby’s heartbeat was gone. A piece of flesh with no soul…and at that very moment it felt like mine escaped my body too. The cupboard thankfully hid me from the world around and gave my tears an excuse to flow free. They kept trickling down my face as I kept reading… A gaping hole was formed under my ribs, and I kept trying to stitch myself back together again. Because I wanted to just run. Run to her and hug her. Not say a word, but just give a hug. And I couldn’t…

At night, when all my roommates went to sleep, I tore off pages from my notebook to write to her. I had a tiny mp3 light that used to go off after every minute or so. So I would keep pressing the play and stop button over and over. Surah Sajada kept playing like that amidst my lost thoughts. I did not know what to write. What do you even say, when your heart aches so much that it renders your tongue useless. So I let the verses of Qur’an and Ahadith speak themselves. They were all I could write. Starting with Surat Ash-Sharh (The Relief).

Allah will reward on patience, without weighing, counting or measuring…

We surely don’t want difficulties in life, but when we go through them, this hadith is a balm for the wounds alhamdulillah – Knowing that Allah will not let anything go to waste…

And then I wrote a letter to my niece/nephew…

I don’t know what gender you were, but you were cherished deeply nonetheless. You were loved even when you didn’t fill the warm folds of my arms. But I’m glad they encompassed your mother when she needed it the most.

She is the best friend I ever had and will ever have. A role model I always look up to.

When I got to know that we would no longer be able to hear your tiny giggles or see you take baby steps into this world, I was reduced to tears while your mother stood strong, still grateful to Allah. Her patience[1] didn’t even waver after seeing my breakdown. I cried for days even though I never saw you. Not even once. But love is not sight-bound.

Being far away from your mother, I wrote a letter to her when everyone slept around me. I wrote on how her patience at first stroke of this calamity is an example for me, for all the mothers out there who have gone through this tragedy[2].

May be she cried when she was all alone. Her tears evaporated, rose up to the skies. Because I could see the hurt in those eyes, and I could hear the crack in her voice, but her lips formed nothing but a smile. You never saw the silent tears your mother shed for you. Her eyes wept, but her tongue didn’t ask God, “WHY?”[3]

So I request that you intercede[4] for your parents in front of Allah on the Day of Judgment so through this pain, they are able to walk through the gates of Jannah.

Today, you have three amazing sisters, the twinkles of my eye. The gift we truly treasure after losing you. And in shaa Allah, more gifts to come…

I cry again as I write to you, and I’m sure your mother will cry again too, reading this – may be in the crease of her pillow cover. Yet nothing will leave her breath, but a smile once again – for you are one of her door to Jannah – where, your playmate is perhaps Muhammad ﷺ’s son Ibrahim. There is a wet-nurse[5] for him, and I hope you share the bond with him too. He was 18 months old[6] and you were perhaps just 18 weeks. You are in a perfect place while we wait to come there too, away from this cruel world. We don’t wish to die, but we wish to enter the world beyond our imaginations, when we do. I hope that when that day comes, we find you playing with your cute little friends around the tall man of stature, Ibrahim Iالسلام‎ عليهI [7]

So I let you go today my beloved, for my embrace can never replace the warmth of his…

[1] The real patience is at the first stroke of a calamity. [Bukhari]

[2] In case anyone amongst you sees the sad demise of three children of (hers) and she resigns herself to the will of God hoping to get reward, she would be admitted to Paradise. A woman from amongst them said: Allah’s Messenger, even if they (the children who die) are two. Thereupon, he (the Holy Prophet, ) said: Even if they are two. [Muslim]

[3] …The eyes are shedding tears and the heart is grieved, and we will not say except what pleases our Lord, O Ibrahim ! Indeed we are grieved by your separation. [Bukhari]

[4] There are no two Muslims, three of whose children die before reaching puberty, but Allah will admit them to Paradise by virtue of His mercy toward them. It will be said to them: ‘Enter Paradise.’ They will say: ‘Not until our parents enter.’ So it will be said: ‘Enter Paradise, you and your parents.” [Nasai]

[6] Ibrahim, the son of the Prophet ﷺ, died when he was eighteen months old. [Abu Dawud]

[7] …..and the tall man you saw in the garden is (Prophet) Abraham, and the children around him are those who died upon Al-Fitrah (the Islamic Faith of Monotheism).”‘ The narrator added: Some Muslims asked the Prophet ﷺ , “O Messenger of Allah! What about the children of Al- Mushrikun (i.e., polytheists, pagans, idolaters, and disbelievers in the Oneness of Allah and in His Messenger Muhammad ﷺ)?” The Prophet ﷺ replied, “And also the children of Al-Mushrikun.” [Bukhari]

This article originally appeared in August 2015 issue of SISTERS magazine.