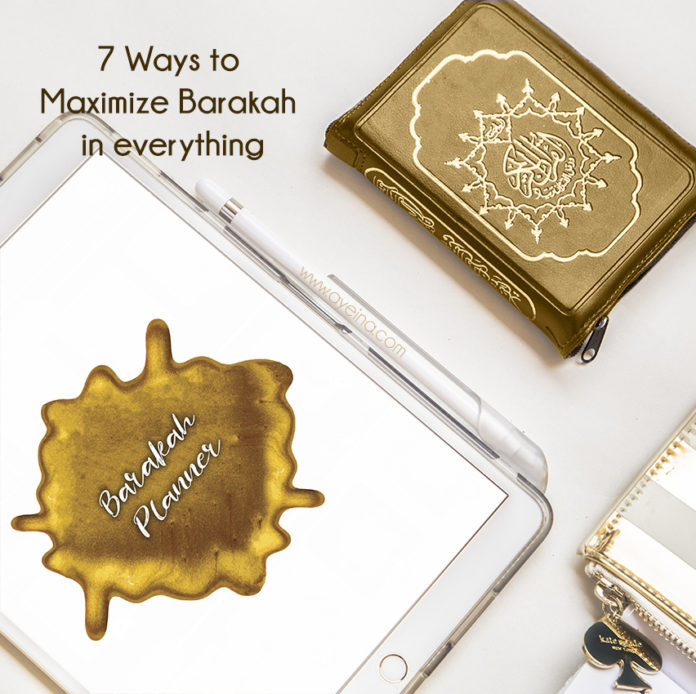 by Bouchra Rebiai (in collaboration with Team AYEINA)

During M Powered Summit 2016, Abu Productive was part of a panel discussion in which he talked about the importance of Muslims having their own self-help terminology that is derived from the Quran and Sunnah, rather than simply adopting Western terminology.

Someone from the audience asked him about the term “abundance mindset” and whether there was an equivalent term for it that is more Islamic, and he immediately said “barakah mindset.”

This confused me. How can one have a barakah mindset? For me, barakah was something intangible, something that was a blessing from God, most probably something that you’ll reap the rewards of in the afterlife. But the word “barakah” means a lot of things. An entry in an extremely popular online Arabic-Arabic dictionary gives the example phrase: “he lived in perpetual barakah”, and explains that it means “he lived in perpetual happiness”.

Now, I doubt there’s anyone who doesn’t want perpetual barakah; or perpetual happiness, so, let’s explore some methods of increasing barakah in our lives from the Quran and Sunnah:

Some may call it a growth mindset. Or positive mindset. Having a barakah mindset means that you monitor the way you think, and try to replace negative thoughts with positive ones.

In the following Hadith, Allah is telling us that whatever we think of Him will be true. If all you expect from Allah is negative things happening in your life, that’s what you’re going to get. However, if you expect positive things, and expect that Allah will send you more barakah in your life, then you’ll definitely get what you expect. So, the next time you find yourself plagued by negative thoughts, remember the following Hadith, and keep your faith in Allah. Instead of trying to eliminate the negative thoughts, replace them with positive thoughts related to the same subject.

Allah says in the Hadith Qudsi: “I am to my slave as he thinks of Me, (i.e. I am able to do for him what he thinks I can do for him).” [Bukhari]

He (may Allah have Mercy upon him) also said: “The one who hopes in Allah should always be optimistic, cautious, and hopeful in Allah’s bounty, expecting the best from Him.”

Stick the post-it note with this hadith written, in your office or put it up where you may be reminded of it (refrigerator, diary, whiteboard etc.)

Early to bed, early to rise, makes a man healthy, wealthy and wise. It’s an English proverb, but combine it with the following Hadith, where the Messenger of Allah (peace be upon him) prayed for his nation (us!) to be blessed in the early mornings, and you have more than one reason to set your alarms to wake you up quite early!

An early morning will help you pray Fajr on time and reap plenty of health benefits, in the form of early morning Vitamin-D-filled sunshine and a morning routine that sets the mood for the rest of your day. What a great way to combine the blessings of timely prayer and worldly good! 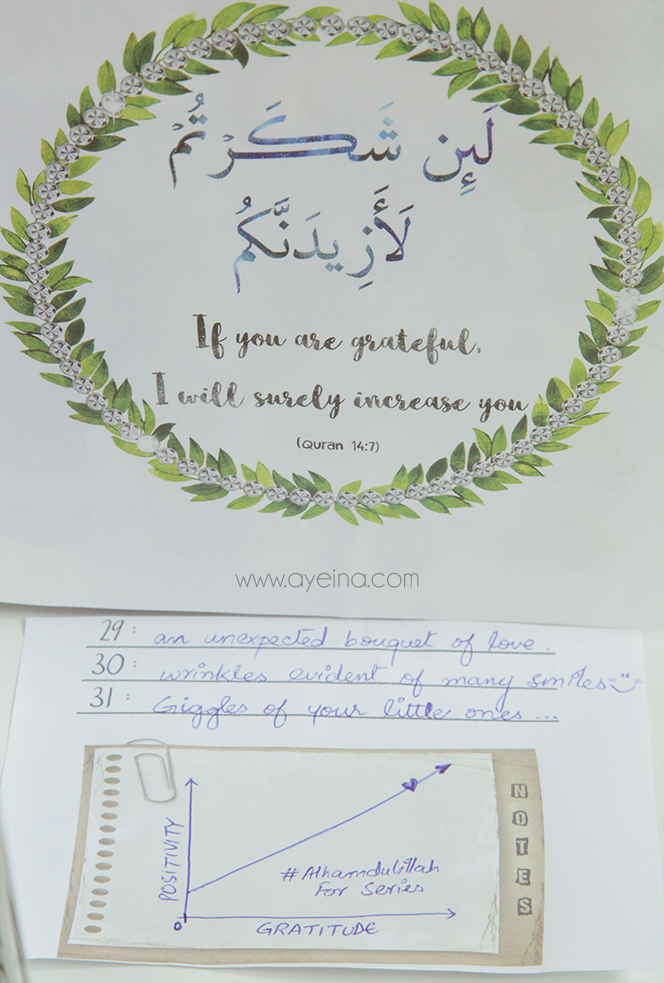 3) Show gratitude for all that you have

Being grateful doesn’t only increase plentifulness or barakah. In fact, another commonly-used phrase, in our daily prayers, “sami’a Allahu liman hamidah”, means “Allah listens to those who say Alhamdulillah ”. This means that those who frequently say “Alhamdulillah” are more likely to have their du’as answered, as Allah is constantly listening to them!

Keep a daily gratitude journal, listing at least one thing you were grateful for during the day, and make a habit out of it. Set a specific time (so you are able to remember it) and stick to it, every day.

4) Be kind to those around you and maintain kinship ties

At first glance, you might say, but where is the barakah in this? Remember, we said one of the meanings of barakah is good; and the following Hadith says that tender feelings make things better. So, being kind increases the goodness of something; in this case, you.

Jarir reported from Allah’s Messenger (ﷺ): “He who is deprived of tenderly feelings is in fact deprived of good.” [Muslim]

Kindness is one of those things that you may not give much thought to while you’re performing it, because you were raised to be ‘nice’ or because you just don’t see the point of it sometimes. After all, why would you give someone a compliment if they don’t look so good anyway; and what is the point of going out of your way to get your sister a glass of water? You may think of it as a small thing, or even an annoying thing. Don’t belittle the little things that you do to be ‘nice’ to others.

Messenger of Allah (ﷺ) said: “He who wishes to have his earnings grow (and be blessed) and his term of life prolonged, he should keep ties with his kin” [Bulugh al-Maram]

Keep a running list of nice things you can do, and review it around midday daily, so that you have enough time to do one of those things before the day is over. 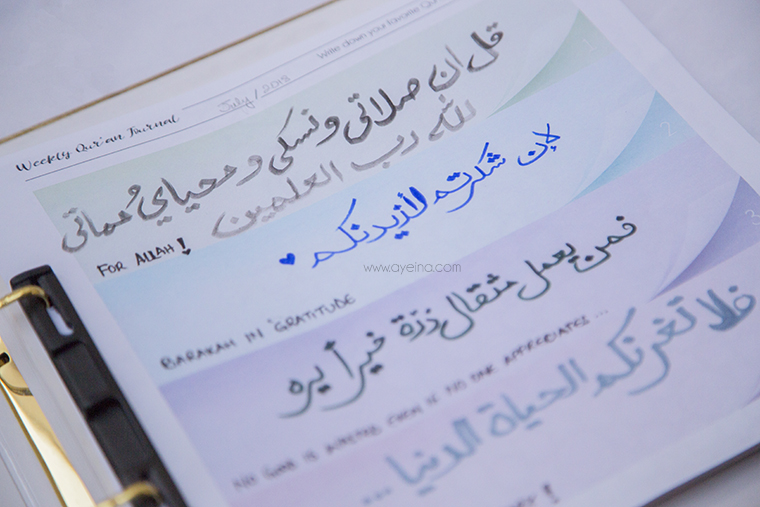 What more barakah is there than being among the angels? Not only that, but the Quran is full of life lessons that we can use and practice daily: enhancing the quality of our life and increasing our happiness. Even if you find yourself stumbling upon the Arabic letters while reading the Qur’an, do not despair; the Hadith mentions that those who recite Quran with difficulty get double the reward. Even more barakah!

In Greg McKeown’s book Essentialism: The Disciplined Pursuit of Less, he mentions that one of his habits for gaining focus daily is reading “inspirational classic literature”. One of his frequently-read books is the translation of the Quran in English! Many non-Muslims find the Quran inspiring, while a lot of us Muslims seek outside sources of inspiration. It’s time we established reading the Quran as a daily habit, so that we can go back to finding inspiration in it.

“And this is a Book which We have sent down, blessed and confirming what was before it…” [Qur’an – 6:92]

Aim to read and understand; so, if you don’t know Arabic, instead of reading just one page in Arabic, read half a page in Arabic and in your native language. This way you’ll be able to derive inspiration from your readings! Don’t over complicate it; if you’re a busy person, even one Ayah a day is a good start.

These verses show you the immense power of saying just a few words. It is the ultimate barakah-bestowing tool. You free your soul of whatever maybe impeding its happiness. Rains pour down, nourishing the soil that you may have planted food in, allowing them to grow. Rivers flow, making your water supply plentiful. Allah bestows His blessings upon you in the form of your progeny. Your wealth increases, allowing you to increase the quality of your life and do more good to yourself, your family, and others.

All of this, packed in a single phrase that barely takes 2 seconds for you to say it. Prophet (saws) used to seek the forgiveness of Allah and repent to Him 100 times a day.

You can be on a plane or walking down a busy street and recite this, without having to specially sit down or take the time out to do the dhikr.

When broaching the topic of charity, many people get defensive quickly, mentioning how tight their financial situation is – surely, Allah will understand their predicament, right? – and how they wish they were rich so they can give more in charity. However, charity isn’t a tax on rich people that the middle class and poor can escape.

We cannot judge which deed is more valuable than another, but the fact is that for us as humans, the less money a person has, the more their charity holds meaning. We’re all moved by the videos of social experiments in which a guy dresses to look as if he’s homeless; no one shares food with him until an older homeless guy comes by with a small sandwich, and without saying a word, splits it in two halves, one for each of them. That homeless guy may not have anything to eat for days, but he’s happy to share, and that is the spirit of charity – feeling empathy for those who have less than you and sharing with them, no matter how much you have.

Abu Huraira reported Allah’s Messenger (ﷺ) as saying: There is never a day wherein servants (of God) get up at morning, but are not visited by two angels. One of them says: 0 Allah, give him more who spends (for the sake of Allah), and the other says: 0 Allah, bring destruction to one who withholds. [Muslim]

Next time you eat out, buy an extra meal and give it to someone who looks like they could use it. When you’re buying groceries for your family, maybe share an apple – at least – with the homeless guy in your neighborhood. Charity doesn’t have to be thousands of dollars, and it surely doesn’t mean starving your kids! 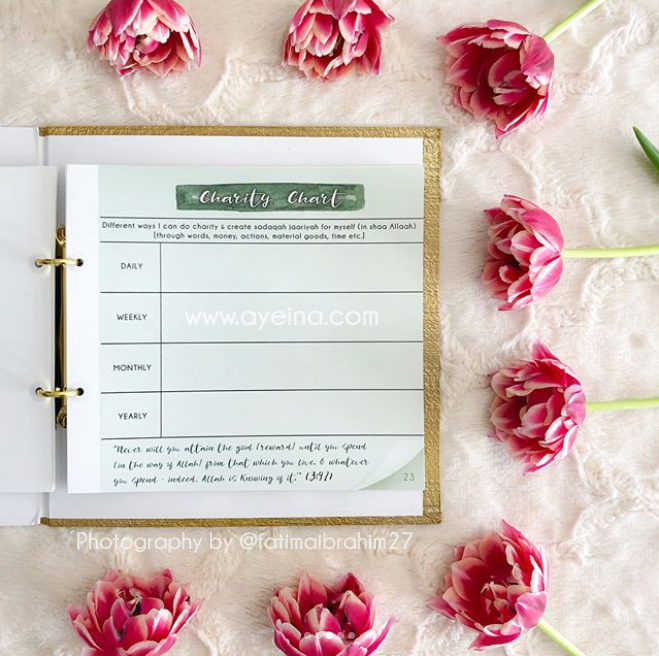 The Messenger of Allah (ﷺ) said: ‘Eat together and do not eat separately, for the blessing is in being together.’” [Ibn Majah]

…when you enter houses, give greetings of peace upon each other – a greeting from Allah , blessed and good…[Quran; 24:61]

Make sure you set out a family time where you can all sit without your devices or television and eat together.

9) Send Salawat upon the Prophet ﷺ

The Prophet (ﷺ) said: If anyone invokes blessings on me once, Allah will bless him ten times. [Abi Dawud 1530]

Make it a part of your dhikr. Whether you’re doing house chores or driving or just travelling, you can send salawaat upon the Messenger ﷺ.

Honesty is indeed the best policy. Truth is hard and bitter at times, but it is worth it in the long run.

Messenger of Allah (ﷺ) said: “Both parties in a business transaction have a right to annul it so long as they have not separated; and if they tell the truth and make everything clear to each other (i.e., the seller and the buyer speak the truth, the seller with regard to what is purchased, and the buyer with regard to the money) they will be blessed in their transaction, but if they conceal anything and lie, the blessing on their transaction will be eliminated.” [Riyad as Salihin 59]

Co-Author’s Bio: Bouchra Rebiai is passionate about spreading knowledge across the language barrier and helping empower women. In addition to being the Chief Wordsmith at her Arabic translation and digital marketing agency Aurora Hikma (aurorahikma.com), she is the host of The Ascending Muslimah Podcast, occasionally blogs at bouchrarebiai.com, and can be found on Twitter @brebiai and on Instagram @bouchra.rebiai