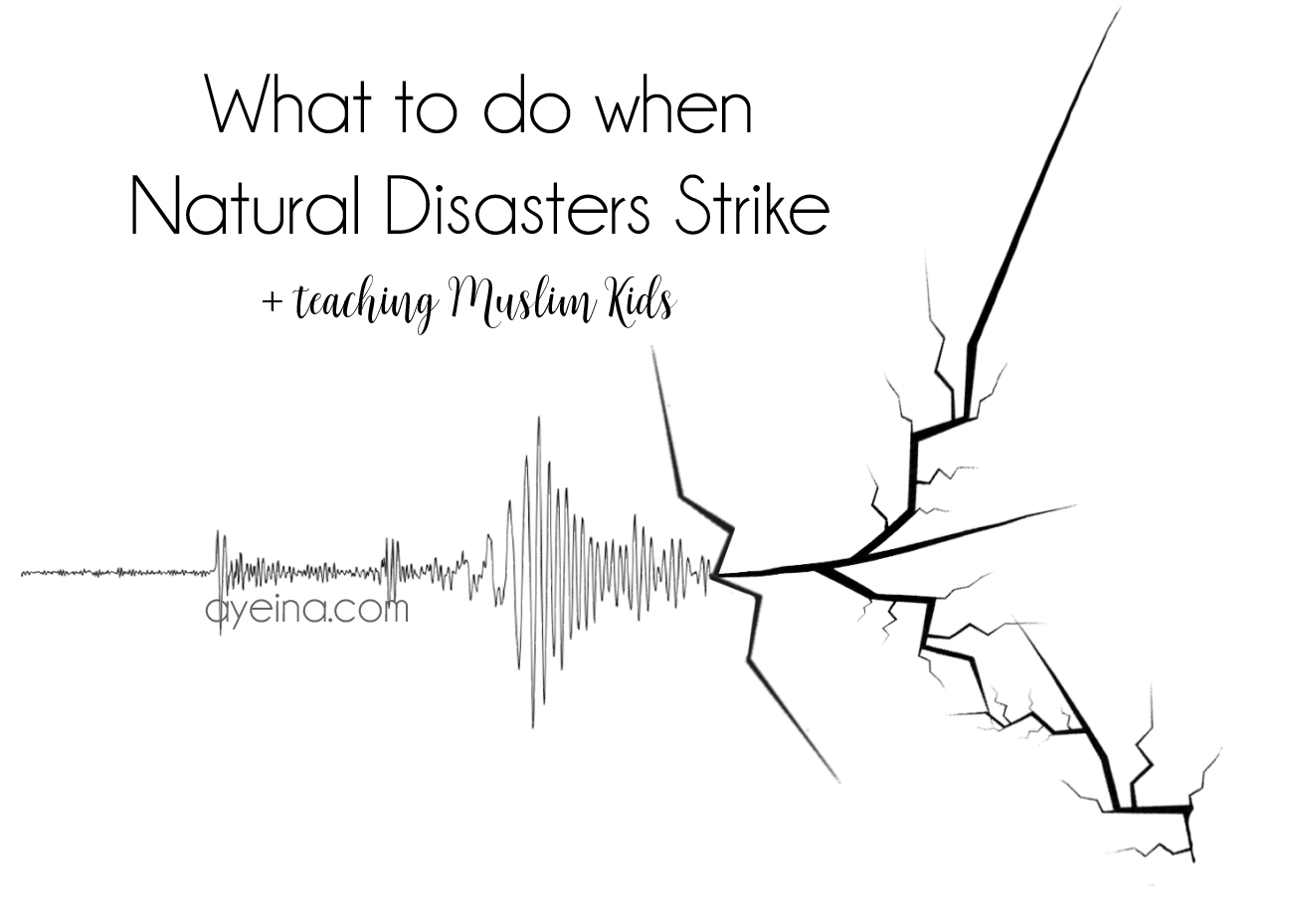 “And We have already sent to nations before you, ; then We seized them with poverty and hardship that perhaps they might humble themselves .” [Qur’an – 6:42]

As my eyes blinked themselves to life, the only feeling I had was of a trembling heart along with a trembling earth beneath me. I looked at my husband with a questioning glance as he woke up with a feeling much like mine. He gave my fear an approval. My lips trembled with the shaking of the ground. They moved themselves with the remembrance of Allah out of fear of unexpected. I looked at my girls and found them fast asleep. As the quake lulled itself to sleep, it left me insomniac. My gaze was lost into the void. I showered myself with endless “what if’s” – all revolving around: what if I would have opened my eyes to the questions of munkar and nakeer? And what did I do so far to answer them easily? Did I even live by those questions? There is so much on my to-do list which was urgent and needed yet I piled them up for a future that is not approaching any sooner? And what not…

I then realized how severely negligent we are in terms of our obligations and responsibilities. Such incidences are a reminder for us. Alhamdulillah! Every trial is a test for a believer. It makes us better Muslims till the time we are still taking breaths of life and sanity. As The Messenger of Allah (ﷺ) said:

What to do when natural disaster strikes?

Few possible recommendations on occasions like these; based on the acts of our beloved Prophet (ﷺ), sahaaba, taabi’oon and the scholars of the Ummah:

Offer dua to ask for mercy and help from Allah, so that He might divert this calamity from the people. Prophet (ﷺ) said, when the wind blew strongly:

One should make the following dua even if there is no natural disaster around:

Shaykh Ibn Baaz (may Allah have mercy on him) said: “What must be done at the time of an earthquake or other calamity, or an eclipse, strong wind or flood is to:

When there is an eclipse (like we had at the time of earthquake), it is recommended to pray Salaat-ul-Kusoof (2 raka’ah prayer in congregation) – It is permissible to pray it individually, as with all other nafl (supererogatory) prayers. However, praying it in congregation is better:

Narrated Abu Musa: The sun eclipsed and the Prophet (ﷺ) got up, being afraid that it might be the Hour (i.e. Day of Judgment). He went to the Mosque and offered the prayer with the longest Qiyam, bowing and prostration that I had ever seen him doing. Then he said, “These signs which Allah sends do not occur because of the life or death of somebody, but Allah makes His worshipers afraid by them. So when you see anything thereof, proceed to remember Allah, invoke Him and ask for His forgiveness.” [Hadith; Sahih al-Bukhari 1059]

Show compassion to the poor and needy, and give charity to them, because the Prophet (ﷺ) said:

“…Be merciful on the earth, and you will be shown mercy from Who is above the heavens…” [Hadith; Jami` at-Tirmidhi 1924]

It was reported that when there was an earthquake, ‘Umar ibn ‘Abd al-‘Azeez (may Allah have mercy on him) would write to his governors telling them to give in charity.

And if your area gets affected by a natural disaster, then please volunteer as there is no replacement to compassion given to those in need. Remember, even smiling is sadaqah.

It took a while for my eyes to adjust to an intact ceiling, thanking Allah I’m not smothered underneath a rubble because I definitely heard the quakes threatening to crack it in half. Yet I’m still alive and breathing. I still have time. So I bend these sinful knees before my Lord amidst forgiveness and gratitude, regrets and promises…

How to Talk to Kids about Natural Disasters?

Kids are curious beings and you may be bombarded with loads of questions when they see something like this or experience it. The video (animation) below can be a great way to introduce the concept of earthquake (I cut out the music part of the video from the start and the end in the embedded version here).

1) Connect them to Allah

If you have kids, they may be scared. Let them express themselves after the tremors go away. Talk to them about it. Use the language children will understand. Connect them to Allah with the power of dua and positive hope (husn-az-zann). Young children need simple information they can understand and need to be reminded that they are safe. Older kids will have questions (loads of them) and will need an opportunity to express their range of emotions.

Monitor and limit television and news. Developmentally inappropriate information and overexposure to news of the event can cause more anxiety or fear, particularly in young children. Adults also need to be careful of the content or conversations that they have with each other in front of children. Tell your child that the situation is not permanent, and provide physical reassurance through time spent together and displays of affection.

3) Teach them Survival Strategies (Before, During & After the Incident)

Find safe spots in your home. Identify and discuss safe spots in each room of your home so that you can go there immediately if you feel an earthquake – such as under a sturdy desk or table, or next to an interior wall. If inside, Drop, Cover, and Hold On. With one hand hold on to the object and with your other arm protect your head and neck. If outside, find an open spot. Find a clear spot away from buildings, trees, streetlights and power lines.

This is a great ARTICLE along with printables for disaster planning.

May Allah keep us all safe from natural disasters, but with each life lost, remember this hadith and make dua for them!

Allah’s Messenger (ﷺ) said, “Five are regarded as martyrs: They are those who die because of plague, Abdominal disease, drowning or a falling building (under debris) etc., and the martyrs in Allah’s Cause.” [Hadith; Sahih al-Bukhari 2829]