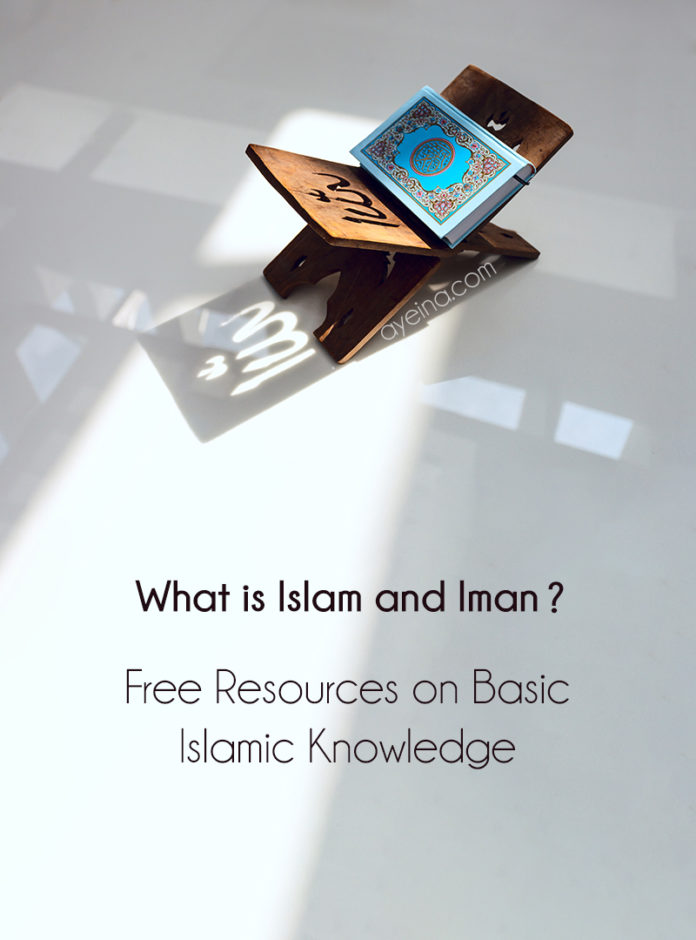 Islam is a monotheistic religion with belief in only one God (Allah). The Arabic word ‘Islam’ comes from the root words س ل م (Siin-Lam-Miim) which means safety/security/freedom/immunity, salutation/greeting/peace, deliver/acknowledge, to pay in advance, submit, sincerity, humility, submission/obedience, to be in sound condition, well without blemish, gentle/tender/soft/elegant etc.

In short, it means peace and submission – surrendering to One God (Allah). Which indicates that a ‘Muslim’ is the one who submits to Allah (and finds peace therein). The same Arabic root word gives us “As Salam u alaikum” (Peace be with you), the universal Muslim greeting.

The essential teachings of Islam are based on 5 principles, referred to as the ‘Five Pillars of Islam’, and 6 fundamental beliefs, known as the ‘Six Pillars of Iman (faith)’. This division is based on the following well known narration:

Islam is a balanced religion that focuses on the life here and the life hereafter both (because both are interconnected). It is a code of life that does not promote renunciation of worldly things, rather it gives us the opportunity to give rights of the Creator and His creation both. The Muslim concept of worship is very broad. We consider everything we do as an act of worship, as long as it is done according to Allah’s guidance and for His sake. In this blog post, we will explore both the ritualistic worship (Specific routines and practices that constitute rituals) and the parts of general worship.

There are 5 formal acts of worship – the core beliefs of Islam which help strengthen a Muslim’s faith. They are called the “Five Pillars of Islam.” – based on the following hadith (narration of Prophet Muhammad ﷺ):

The Messenger of Allah ﷺ said, “(The structure of) Islam is built on five (pillars): Testification of ‘La ilaha illallah’ (none has the right to be worshiped but Allah), that Muhammad ﷺ is His slave and Messenger (shahadah), the establishment of Salat, the payment of Zakat, the pilgrimage to the House of Allah (Ka’bah), and Saum (fasting) during the month of Ramadan.” [Riyad as salihin]

Shahadah is the declaration of belief in the oneness (tawheed) of God (Allah) and the acceptance of Muhammad ﷺ as God’s final messenger. One must profess this testimony of faith at least once in their life to enter the fold of Islam – when they become consciously Muslim (whether they are born into a Muslim family or not).

This testimony is repeated in the adhaan (call to prayer) 5 times a day by a muadhin (the one who calls to prayer). It is divided in 2 statements:

I bear witness that there is no deity (worthy of worship) except for Allah. To know more about oneness of Allah (Tawheed – singling out Allah alone in everything that’s exclusive to Him – as umm Jamal-ud-Din said in her audio lecture below), please listen to the following ad-free audio lectures/podcasts below:

And I bear witness that Muhammad ﷺ is the slave and the (final) messenger of Allah – Quran, the central religious text of Islam (the word of Allah), was revealed to Muhammad ﷺ by Allah. He ﷺ was sent to restore Islam, the unaltered original monotheistic faith of all the Prophets Allah sent before him. To know more about Muhammad ﷺ, read his biography, called the “Seerah“. “The Sealed Nectar” by Sh. Safi-ur-Rahman is a great book that you might want to read over and over. For ease, please listen to the following ad-free audio lectures/series/podcasts on seerah:

Prayer is the only obligation that’s needed 5 times a day to make ourselves more disciplined and not lose our connection with Allah.

Through the prayer, a Muslim remembers Allah often and avoids falling into sin. Prayer is sometimes performed on a small rug or mat. Muslims can pray individually or together in a mosque, where a leader in prayer (imam) guides the congregation. To know more about this most regular tenet of Islam, please listen to the following ad-free audio lectures/podcasts on salah:

Zakah is an obligatory charity in Islam. It’s how we give back, out of our own wealth, to those less fortunate. The word ‘zakah’ in Arabic literally means ‘to purify’. In a world of gross social and economic inequality, it is a right which the poor have over the wealthy. It’s a mandatory duty on all able Muslims to give after every lunar year 2.5% of the wealth they possess above a certain threshold called Nisab.

To know more about zakat and its importance in our social economy, please listen to the following ad-free audio lectures:

All healthy adult Muslims are required to fast in the month of Ramadan (9th lunar month) by refraining from food, drink and sexual intercourse from dawn till dusk. The goal of fasting, as mentioned in the Quran, is to increase one’s piety and God-consciousness. Through this temporary deprivation, they renew their awareness of and gratitude for everything Allah has provided in their lives by sharing the hunger and thirst of the needy as a reminder of the religious duty to help those less fortunate. To know more about fasting in Ramadan, please listen to the following ad-free audio lectures:

Pilgrimage to the House of Allah, the Kabah – in Makkah, Saudi Arabia – is obligatory for every able Muslim (whose health and finances permit) once in a lifetime. Hajj is a physical and visual proof of the unity and equality in servitude of Allah.

For all rites of pilgrimage (manasik-e-Hajj) and Umrah in one compact form, refer to the Pilgrim central concise and easy to use app.

For in-depth lectures/podcasts, please listen to the following ad-free audios:

Iman (إِيمَان ʾīmān) literally means faith or belief. Its most simple definition is the belief in the six pillars of faith, known as arkān al-īmān. According to the hadith mentioned in the start, iman, Islam and ihsan are the 3 dimensions of our deen (religion).

Allah is One God. He is self-sufficient. He has no father or mother and no son or daughter. He has no equal. Allah can not be compared to any of His creation. He is the God of all humankind, irrespective of tribe, race, or group of people. He can’t be seen or heard in this world. But He sees and hears everything. Even the whispers of our heart. Take some time to learn about the names and attributes of Allah, His Mercy, His Compassion, His Knowledge, etc., and all that they mean to get to know your Lord better. Here is a blog post on 99 Names of Allah to get started in shaa Allah. To know more about what it means to believe in Allah, please listen to the following ad-free audio lectures/podcasts:

2. Belief in the Angels

Angels are the messengers of Allah, who are pure and spiritually obedient creatures. They were created from light and were created, before humans, to fulfill Allah’s commands and worship Him. To know more about Angels (and even tell your kids about them), please listen to the following ad-free audio lectures/podcasts:

Following are the notes I took from all the lectures linked above. Sorry, they are not in the best state really, but as a mother of 2 small kids, this is my best for now 😀 I hope that some day I’m able to format them into presentable notes. Nonetheless, I hope it helps. BaarakAllahu lakum!

3. Belief in Prophets/Messengers of Allah

All of the messengers and prophets of Allah were mortal human beings who were endowed with Divine Revelations and appointed by Allah to teach humankind how to submit to His will and obey His laws for their success in this world and the Hereafter.

To know more about what it means to believe in all the Prophets and Messengers Allah sent, please listen to the following ad-free audio lectures/podcasts:

To know more about what it means to believe in the books Allah sent, please listen to the following ad-free audio lectures/podcasts:

Quran is the only unaltered book among all, so it’s important to know this pure message (not changed by any human being unlike other books). It is free of falsehood and a guidance for all mankind. Listen to the series AMAZED BY THE QURAN by Nouman Ali Khan to strengthen your belief in the final word of Allah!

If you’d like to listen to the Quran, visit QURAN CENTRAL or download the App for free Quran audio downloads.

If you’d like to read the Quran in English language, visit ENGLISH QURAN or download the App for authentic Quran translation and access it on any device.

If you’d like to learn how to read the Quran in it’s original language (Arabic), visit ALIF CENTRAL or download the App for free Quran lessons (with proper tajweed – correct pronunciation of the letters and words of the Quran).

And if you’d like to take it a step further and memorize the Quran in it’s original language (Arabic), visit MEMORIZE QURAN or download the App for free Quran memorization lessons. It has a verse by verse playback feature by over 50 reciters.

If you’d like to understand the word of Allah through the tafsir (explanation) of the Quran, please visit this blog post for all the free resources to understand Quran better.

5. Belief in the Last Day (Aakhirah)

After the world will end, everyone will be brought back to life (resurrection) on an appointed day (bodies will be reconstructed and the souls will be returned to them) to face Allah’s Judgment based on what they did in the world and the intentions behind them. No one but Allah knows when this day will come, so it is up to us to live each day as if it was our last. To know more about the day of judgement (aakhirah), please listen to the following ad-free audio lectures/podcasts:

6. Belief in the Decree of Allah (Qadr)

A Muslim believes in Allah’s predestination of all things and events (Qadhaa), His decree (Qadar), His wisdom in His actions, and His will. Nothing in the universe can occur without His will. We believe in Allah’s eternally pre-existent knowledge – nothing in existence lies outside of His eternal control. He has the knowlege of all that will happen. But He doesn’t stop human beings from making free choices. Qadr is a complicated concept to understand sometimes, so I hope that the following ad-free Islamic audio lectures and podcasts help:

I mentioned ad-free because Youtube is a pool of distracting content filled with ads that take away from the learning experience. To discover more about Islam, you can explore further topics HERE (I just covered the basics of our religion on which our faith stands).

Wahnan Ala Wahn – How to Survive Hardships of Motherhood

When to say In shaa Allah and when not to

How to Turn to Allah when You Feel so Distant