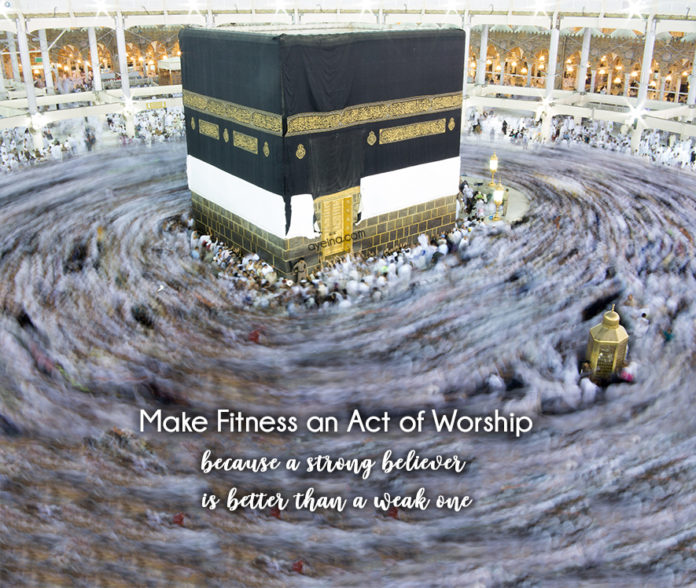 Many Muslims want to be active, but struggle to incorporate fitness into a busy lifestyle. Probably you’ve heard the hadith:

Messenger of Allah (ﷺ) said, “A strong believer is better and dearer to Allah than a weak one, and both are good. Adhere to that which is beneficial for you…[Muslim]

The believer who is physically stronger is better because they are more active and energetic in the performance of worship and taking care of the needs of others. Because you can’t pour from an empty jug so your health and fitness directly affects the services you provide others. Hence, to help boost your motivation to live an active lifestyle, this article will share 3 awesome Sunnah inspirations to inspire you to get moving in shaa Allah!

1. Hike in the Footsteps of Muhammad ﷺ

The Prophet ﷺ exemplified a high level of fitness and encouraged his Ummah to be active as well. Even before Muhammad ﷺ was a prophet, he used to climb onto Jabal an Noor – the mountain of light (and sit in seclusion in the cave of Hira) to contemplate on deep spiritual matters. And note that reaching the cave takes around 1200 walking steps. It is situated at a height of 270 m (890 ft). The cave itself is about 3.7 m (12 ft) in length and 1.60 m (5 ft 3 in) in width. Muhammad ﷺ is believed to have received the first revelation of the Quran on laylatul Qadr (night of Power) by the angel Jibreel there.
When Muhammad ﷺ moved to Madinah, he would often climb Mount Uhud with his companions. The following incident literally happened on a hike!

On a personal note, I have hiked Mount Uhud twice and it is truly an incredible experience! The Uhud mountain range was one of the hardest mountain hikes I have ever climbed due to the lack of paths up the mountain and the jagged rock structure – even though I’m a hiking enthusiast. However, the feeling of serenity as you reflect that you may literally be following in the footsteps of the Prophet ﷺ along this mountain is unmatched on any other hike!
As Muslims living in today’s modern society, reflecting on the active lifestyle of the Prophet ﷺ should encourage us to ensure that we incorporate activity and exercise in our daily lives, so we don’t neglect this beautiful Sunnah! Climbing mountains is not only a great workout, but also a very symbolic activity that reminds us of the uphill struggle of life!

2. Revive the Spirit of the Companions (through archery & other sports)

The Prophet ﷺ encouraged us to pick up active hobbies such as swimming, horseback riding, archery and wrestling. The Prophet ﷺ himself defeated the strongest wrestler in town – Rukana. Wrestling is a physically challenging sport that many of the companions frequently engaged in. Today, we can look into similar activities such as karate, kickboxing, bootcamp and weight training to get similar strength benefits and keep our bodies in good shape!

Another sport to look into, is archery. One of the companions Uqbah bin ‘Amir Al-Juhani (May Allah be pleased with him) reported that the Messenger of Allah (ﷺ) said during a sermon,

If you’ve ever done archery, you’ll realize the amount of strength your upper body and arms require to hit the target and hold the bow still. Archery is also great for improving concentration and hand eye coordination. The act of drawing a bow puts tension in the chest, hands, arm and large upper back muscles, and non-core areas of your anatomy like the rotator cuffs, which support your shoulders. The correct and continuous repetition of this movement strengthens these tissues. This is a sport that requires patience because it is not about speed but about precision – and precision takes time and patience.

The companions of the Prophet ﷺ were fit and used their strength to serve Islam. Zubayr ibn Awwam (RA), one of the 10 companions promised Jannah, once swam up the coast of the red sea for kilometers to report to the Muslims the state of an important battle taking place. If anyone has swam by the coast of any sea, they know how difficult it is to swim in the ocean with all of the waves and currents pulling you into different directions!
Ali ibn Abi Talib (RA), the cousin of the Prophet SAW, once single-handedly unhinged a gate that took 8 people to open and used it as a shield. That is a miraculous feat of strength!

It was not only the men that were strong, many of the female companions also used their strength to help the Ummah and defend themselves. Nusaybah bint Ka’b (RA) – also known as Umm Ammarah, was a nurse during the battle of Uhud, as the Muslims had to defend themselves from an army that came to attack Madinah. When the Prophet ﷺ’s life became endangered, she physically defended him with such tenacity, it was said wherever the Prophet ﷺ would look, he would see her fighting for him.
In another account, Safiyya ibn Abdul Mutallib (RA) also defended the women and children at a vulnerable point in the Battle of Ahzaab, as did Umm Hakeem (RA) in another report. Both women were able to fend off attackers on their own to keep their people safe.
Being fit and strong is not just about being able to engage in self-defence. Umm Sulaym (RA) went to Hajj in her last trimester of pregnancy and went through labour and delivered as a pilgrim. In addition, life in the Arabian dessert was harsh and the female companions needed physical strength to complete daily tasks.

Today, we need to reflect upon how we can challenge our bodies and make sure we are maintaining this tradition of strength, despite the prevalence of modern comforts! Being physically active as Muslim women means using our energy and strength to be productive vehicles for change! Many times we hold ourselves back from our ambitions and dreams as we feel exhausted and sluggish. Taking care of our body boosts our energy and allows us to pursue our goals!

3. Remember that fitness can be worship, too!

As Muslims, it’s important to take time to reflect why our bodies hold such importance. Without a healthy body we are unable to properly  perform the movements of our 5 daily prayers. When we enter the masjid and see rows of our elderly community praying in chairs due to chronic conditions, obesity and lack of mobility, this should serve as a powerful wake-up call to remind us that we must train our bodies now to ensure we have the strength to keep worshiping Allah to the best of our abilities!

Allah’s Messenger (ﷺ) said: “…Your body has a right over you…” [Bukhari]

This narration transforms our understanding of what are bodies mean to us. They are trusts (“Amaanah”!) given to us by God, meant to be maintained and strengthened. This amaanah will testify for or against us. Our limbs will talk when our mouth would not.

Unfortunately, we often neglect our bodies. Our bodies decline slowly over time, and it can be difficult to see how our choice to skip a workout or fail to be active today will affect our lives in such a profound way and limit us in the future. The Prophet ﷺ spoke of this tendency for Muslims to be neglectful of our bodies, when he ﷺ said:

“There are two blessings which many people lose: (They are) Health and free time for doing good.” [Bukhari]

A strong body means a useful body that can be used in the service of Allah and His creation! Let’s all make the commitment to live an active Muslim lifestyle… starting today in shaa Allah!

Author’s Bio: Amina Khan is an award-winning fitness specialist and Founder of Amanah Fitness, dedicated to restoring health in the global Muslim community. She has been named Canada’s Top Fitness Professional of the Year for her work promoting weight loss and fitness for Muslim women around the world. Her goal is to inspire Muslims to revive the Sunnah of healthy active living! She is currently pursuing her Ph.D. in Health Psychology. To get started with modest workouts for Muslims at home, download her free Energy-Boosting workout guide at www.amanahfitness.com/workout!