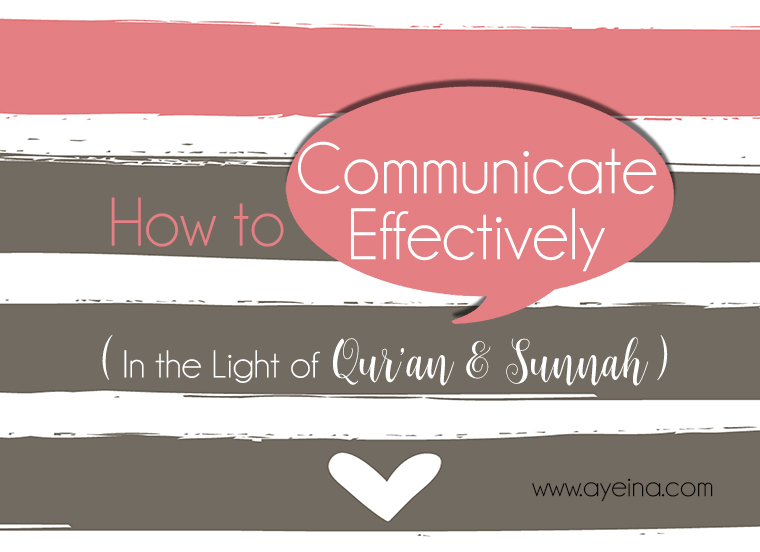 The success in life is based largely on how a person gets along with others, how he affects others and how he reacts to others. Maintaining good relationship with family members, friends, official members, business friends, and customers is the key to success, well-being, welfare, peace, happiness, prosperity, et cetera. With effective speaking, you can achieve these things in shaa Allah. If our intention is to live a peaceful and happy life in this world, we will have to learn how to speak effectively.

“Invite to the way of your Lord with wisdom and good instruction, and argue with them in a way that is best…” [Qur’an 16:125]

Effective speaking according to Islam can teach us valuable lessons on how to give public speeches or communicate one on one in general. Following points affect one’s way of speaking greatly and bear consequences accordingly:

“Your smiling in the face of your brother is charity…” [Tirmidhi]

“Abdullah ibn Haarith radiyallahu anhu reports, I did not see anyone who smiled more than Rasoolullah (ﷺ).”

Although in the age of telecommunication, it’s not difficult for an effective conversation to take place without facial expressions – it’s about emotions and not necessarily facial expressions (so if you are a niqabi, don’t think you can’t communicate effectively – the tone of your voice delivers your expression well).

The rule of thumb is to ask yourself following questions before speaking (as THIS blog post beautifully explains it):

2) Is it قَوْلًا سَدِيدًا (A Word of appropriate justice/ A True word)?

The triliteral root of the word سَدِيدًا is sīn dāl dāl (س د د) which means to be straight to the point, hit the right point, speak or act rightly, be well directed, right thing, true, just etc.

‘Abdullah reported Allah’s Messenger (ﷺ) as saying: “It is obligatory for you to tell the truth, for truth leads to virtue and virtue leads to Paradise, and the man who continues to speak the truth and endeavours to tell the truth is eventually recorded as truthful with Allah…” [Muslim]

Anas (May Allah be pleased with him) reported that Prophet (ﷺ) used to repeat his words thrice so that the meaning thereof would be fully understood, and whenever he came upon a gathering of people, he would greet them. He would repeat Salam thrice. [Bukhari]

Abu Huraira reported that the Messenger of Allah (may peace be upon him) said: “I have been given superiority over the other prophets in six respects: I have been given words which are concise but comprehensive in meaning…” [Muslim]

The triliteral root of the word مَّعْرُوفًا is ‘ayn rā fā (ع ر ف) which means something known, recognized or acknowledged (commonly).

Narrated Abu Huraira: Allah’s Messenger (ﷺ) said, “Whoever believes in Allah and the Last Day should talk what is good or keep quiet. [Bukhari]

When you stick to this rule, you will avoid back-biting, abusing, blaming, arguing, hurting, accusing, etc. – avoiding a lot of sins as a result in shaa Allaah. Therefore, at the time of difficult situation – when you don’t know what to say, simply stay silent.

‘Abdullah bin ‘Amr narrated that the Messenger of Allah (s.a.w) said: “Whoever is silent, he is saved.” [Tirmidhi]

The triliteral root of the word بَلِيغًا is bā lām ghayn (ب ل غ) which means far-reaching, attaining, to fulfill a task, come to an age or come to a point.

When you are speaking, try maintaining the suitable pace and volume. A person’s way of speaking shows the growth and maturity of his mind. Respect the age, relationship, position, time and mood of the addressee. If you deliver even the truth at the wrong time, you may not get the desired effective result.

“And be moderate in your pace and lower your voice; indeed, the most disagreeable of sounds is the voice of donkeys.” [Qur’an 31:19]

Narrated Al-Bara’ ibn Azib: The Prophet (ﷺ) said: Two Muslims will not meet and shake hands having their sins forgiven them before they separate. [Abu Dawud]

Hand shaking is only applied to individuals of the same-gender. It signifies how you give importance to the other person and how receptive and attentive you are towards them. Put your phone aside and be present physically and mentally to assess the conversation properly – be it children, your spouse, parents or even strangers – your ‘presence’ is essential for the communication to be effective in shaa Allah.

It is related from Ebrahim bin Muhammad (Radiallahu anhu) who is from the sons (grand sons of Ali radiallahu anhu, that whenever Ali radiallahu anhu described the noble features of Rasulullah (ﷺ), he used to say: “…When he addressed a person, he turned his whole body towards that person. (He did not only turn his face towards the person he addressed, as this is considered impolite, and sometimes, it even denotes pride. Sayyidina Rasulullah (ﷺ) faced the person he spoke to, with his chest and body…”

May Allah help us preserve our relationships through the beautiful teachings of effective communication.

Author’s Bio: Dr. Noor ul Hussain K. is an Islamic Scholar, Speaker, Author, Translator, and Editor. He has worked as an editor at International Islamic Publishing House, Riyadh, from March 2011 to March 2016. He has authored 14 books so far in English and Urdu. For more, visit www.cris.co.nf

7 Ways to be Happier as a Single Muslimah

3 Fitness Lessons From the Sunnah

10 Ways to Love Yourself as a Muslim