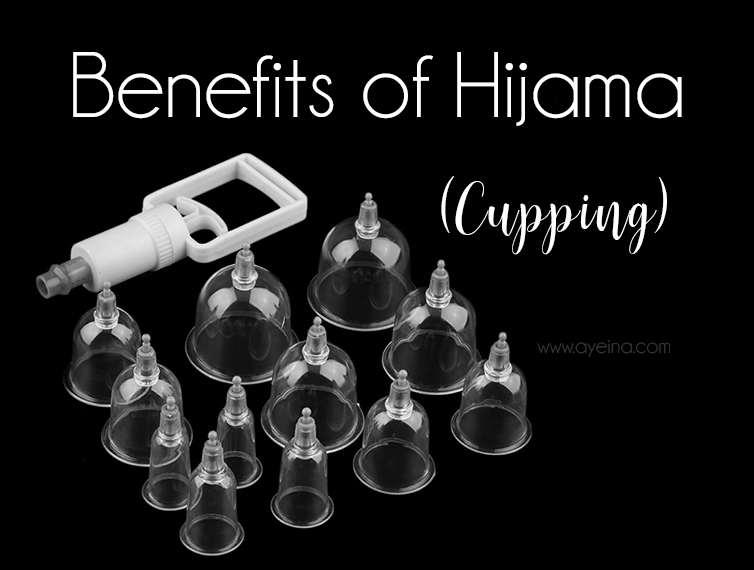 by Sofia (in collaboration with Team Ayeina)

The human race has been looking for ways to cure diseases at every stage of its existence. Be it Aztecs, Roman, Greek, Persian or Egyptian civilizations – the thirst for finding antidote has always been there. However,  not all remedies had the potential to survive the different periods in time and continue on to the 21st Century.
Hijama, on the other hand, is one of the few procedures which has survived over time and is still very much present in this time of modern medicinal practices.
This treatment of cupping dates back to ancient Egyptian civilization around 5000 years ago. Not only that, Hijama (cupping) roots back to the life of prophet (saws) and his companions as well, making it a part of a sunnah.

After its recent spike in Olympics, here are the reasons why you should also try hijama:

1) Because Muhammad (ﷺ) recommended it:

The Prophet (ﷺ) said: If anyone has himself cupped on the 17th, 19th and 21st it will be a remedy for every disease. [Abu Dawud]

2) Because Muhammad (ﷺ) did it himself:

The Prophet (ﷺ) is said to have had hijama on top of his head, his foot, both sides of his neck and between his shoulders etc. The practice of hijama was continued by his companions after his death and it has a strong presence in middle eastern countries to this date.

3) Because it is beneficial and painless:

Most of the people who never get it done are those who fear the procedure and think it will hurt a lot. Rest assured that slight incisions are completely harmless and painless when done by a professional. They don’t leave any mark on your body like a deep cut does.

The word Hijama in Arabic is derived from word ‘Hajm’ which means ‘sucking’.

Hijama is performed by applying cups on different points of the body which then generate negative pressure through vacuum and allows the blood to accumulate or flow towards it, the pressure is then released and superficial incisions are made on the surface of the skin.

After the incisions, cups are reapplied on the same parts and blood is collected in these to be disposed off later. This blood is believed to be diseased or unhealthy and its discharge provides a way for detoxification by removing pathogens, toxins, and impurities from blood which might be blocking the passage for its smooth flow.

These impurities may also result in hormonal imbalances which in turn cause many illnesses in the human body.

4) Because it helps with physical ailments:

Due to its ability to allow your body to function in an optimal way; hijama can be used for a number of health issues namely:

*Migraines: As per Sunnah of our Prophet (ﷺ), hijama has been found to be very effective for migraine and/or headache. Please note that the part of your head needs to be shaved before getting hijama done. Your mane will come back soon, don’t worry. If you have long hair then it gets hidden beneath the layers anyway.

*Detoxification: An important aspect of hijama is that it can be done even in the absence of any illness because it is a very good source of providing detox and thus optimizing the functioning of internal organs – like strengthening of immune system and white blood cell production etc.

*Bulging Disc Pain: The presence of toxins in your body can result in causing bulging disc problem because these toxins weaken the body tissues by obstructing the blood flow or stopping the nutrients from reaching their target areas.

5) Because it’s effective for emotional well-being:

Since hijama is effective in balancing the hormones of the body, it can keep the basic imbalances in the body in check biíthnillah. Usually, insomnia or general stress is treated with Hijama in conjunction with the massage.

A large number of people have been facing the problem of chronic fatigue without the presence of any physiological or psychological disease. Once more it has been seen that in undergoing cupping the person feels a significant improvement in his/her fatigue problem.

Psychological problems and hypertension can also be cured through hijama.

Although it can have different effects on different people and there may still be a need for medical intervention if your condition demands so, but at the end, it can be safely said that Hijama incorporates the hidden potential of being the cure for so many common illnesses we suffer.

The Prophet (ﷺ) was cupped and he paid the wages to the one who had cupped him and then took Su’ut (Medicine sniffed by nose). [Bukhari]

For some people, hijama alone can do wonders. For some, it can help a great deal by combining it with other medicines. Nonetheless, a medical expert should be consulted beforehand and you should make sure that the one who is doing hijama is qualified to do so.

With so many comments, we realized there are following main concerns of the people who’re afraid to get Hijama/cupping done:

It is slightly uncomfortable of course, but it doesn’t hurt like a deep cut does, or how an injection may feel. Many patients describe the feeling of shallow incisions as ticklish or light scratching.

It is mostly done on the back or the head – so any kind of blood will be out of your sight. Ask someone to distract you if the fear overwhelms you. The procedure doesn’t take long.

It shouldn’t leave any marks if a professional is doing it! After a few weeks, you won’t be able to tell where you got hijama done.

Let’s say it’s a placebo effect – if you get healed psychologically through something that is in sunnah, then there’s only good in it. Your belief has an amazing capability to heal you! You get the reward for following the sunnah and you get benefits without going through any harmful medical intervention.

“To speak to the concern about a placebo effect, in short: it’s not! Hijama (aka Islamic medicine) and Chinese medicine both share a root foundation that toxins in our bloodstream are at the root of a lot of health issues. The idea of hijama and Chinese medicine is to not only remove the toxins, but also improve the circulation of blood. As an educational scientist, I can tell you that hijama (like Chinese medicine) is empirically based, with a number of peer-reviewed publications to support their efficacy”. [Muslim Kid Lit].

Hope that answers most of the concerns you have! Rest, you can always consult the hijama practitioner or a doctor before the procedure.

Co-Author’s Bio: Sofia is a housewife during the day and a writing ninja during the night, and is based in New York. She typically writes about alternative therapies, health, fitness, home decor etc. She loves her kids more than anything, and she treats her writings as her kids as well! She is offering a free ebook by Hijama Nation on everything you need to know about Hijama.