All the ahadith references from sunnah.com are embedded in the (green) hadith text. (The purple underlined text means a resource link is embedded in it). These are not COMPLETE ahadith, but (short and) complete set of Arabic instructions taken from ahadith to instill small parts of sunnah in your kids’ daily routine easily in shaa Allah.

Everyone strives to memorize the Qur’an, but very few try to memorize ahadith. So this “Short Ahadith Series” will help you memorize parts of ahadith (or full ahadith) one by one. We will start from two and gradually progress to more words in shaa Allah. I have put the series in Kids corner because they are as easy for kids to learn as well. They will also help you to teach your kids a few Islamic manners and while disciplining them, you can always use the Arabic words instead, so they can get the hang of it too.

Following words have been taken from these ahadith (a part of which is also talked about in Qur’an [49:12]). You would basically have to memorize just one word in most of the following ahadith (the first word “laa” in all of them (except the first) is constant and recurring) – hence mentioned these in the 1 word category.

The Prophet (ﷺ) said, “Beware of suspicion (about others), as suspicion is the falsest talk, and do not spy upon each other, and do not listen to the evil talk of the people about others’ affairs, and do not have enmity with one another, but be brothers.  [Bukhari 5143, 5144]

(The above hadith is broken down in point 1, 2, 3, 5 and 10 – other similar ahadith have been linked in their respective words) 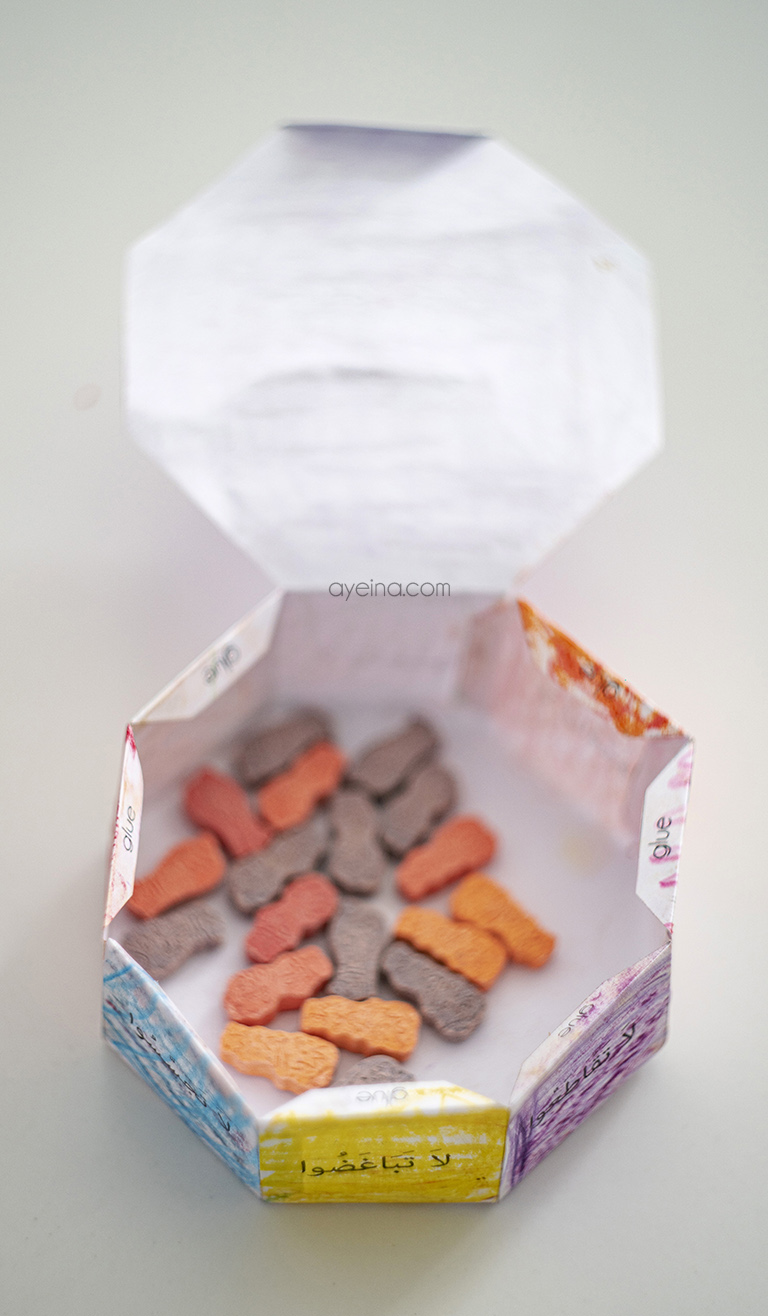 Teaching children not to constantly engulf themselves in negative vibes, you may say:

Technically, these are 3 words (if you consider “wa” as well), but since these chains of narrations start with this commandment, it’s a great way for you to start as well.

The word “dhann” has been derived from three root words ظ ن ن (Dha-Nun-Nun) which means to think, suppose, doubt, assume, believe, imagine, be sure of something in view of one’s observations, to seek repeatedly/time after time to know a thing, ask or inquire after news or tidings of something, inquire or seek for information about something or someone etc.

2. No useless investigation or eavesdropping

Teaching children not to be nosey or not to look for other’s faults, you may say:

{ Translation: “Do not be inquisitive about one another (do not eavesdrop or listen to the evil talk of the people about others’ affairs)” }

The word “Tahassasu” has been derived from three root words ح س س (Ha-Siin-Siin) which means – To listen, to seek repeatedly/time after time to know a thing, ask or inquire after news or tidings of something, inquire or seek for information about something or someone, to be pulled out or up or off…

The root words also carry meanings like – to slaughter, destroy, kill, make one’s perceiving powers dead, make one’s sound or motion to cease, despise someone, devour, blast or burn, carry or remove or shake off, to be tender or compassionate towards someone (lit., to feel for someone), lament for someone, perceive or become sensible of something, know a thing by means of any of the senses, learn a thing, know a thing certainly, to be certain or sure of something, to be eradicated or displaced, fall out or come out, fall continuously/by degrees/one part after another, break into pieces.

Yes! That’s the beauty of Arabic. So many words come out of one root word. It all then depends on context and usage.

Teaching children not to spy/stalk, you may say:

{ Translation: “Do not spy upon one another” }

The word “Tajassasu” has been derived from three root words ج س س (Jiim-Siin-Siin) which means to test or judge or scrutinize a thing, to spy or investigate or examine in order to form a judgement, inquire about or spy into a thing.

Teaching children not to be jealous, you may say:

{ Translation: “Do not feel envy with the other” }

The word “Tahaasadu” has been derived from three root words ح س د (Ha-Siin-Dal) which means To envy, grudge, to dislike that a person possesses a thing (and wish that it would depart from him and transfer to himself), to wish that a person be deprived of a thing.

Allah teaches us in the Qur’an, to seek refuge from the envious, in Surah Falaq.

5. No grudges or hatred

Teaching children not to have extreme feelings of hatred or hold grudges against each other even when the heat is blown off, you may say:

{ Translation: “Do not hate (or carry grudges against) one another” }

The word “Tabaaghadu” has been derived from three root words ب غ ض (Ba-Ghaeen-Dawd) which means Becoming hateful, odious or an object of hatred, fall of a good fortune. 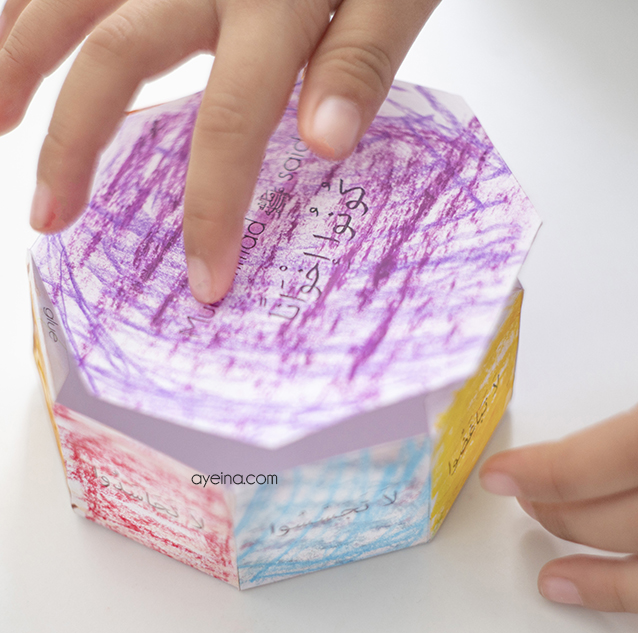 Teaching children not to sever blood ties because it takes barakah (blessings) away from our lives, you may say:

{ Translation: “Do not cut off relations of kinship” }

The word “Taqaata’u” has been derived from three root words ق ط ع (Qaf-Taw-Ayen) which means to cut/sever/disunite/separate/detach, to disable in prosecuting, unable to proceed in, withdraw, break down, perish/cease/finish/fail, cut short /stop, interrupted, put an end to, a piece/bit/part/portion cut off from a whole, herd, distinct portion.

Teaching children not to turn their backs on each other due to dissimilarities or desert one another, you may say:

{ Translation: “Do not desert (stop talking to) one another (or shun one another/ turn your back towards one another)” }

The word “Tadaabaru” has been derived from three root words د ب ر (Dal-Ba-Ra) which means to turn the back (al-dubr – the back; the back or hind part of anything; the latter, or last, part, of a thing, an affair, or an event, or of anything), flee, withdrawal, setting, turning away (idbar), take a thing away, extreme, to perform or execute the affair with thought or consideration (yudabbir), reflect (tadabbur) etc.

Teaching children not to compete each other on things that don’t benefit their aakhirah, you may say:

{ Translation: “Do not compete with each other (in matters of dunya)” }

The word “Tanaafasu” has been derived from three root words ن ف س (Nun-Fa-Siin) which means to become high in estimation, highly prized/precious/valuable and therefore desired with much emulation or much request, envy, to Bring forth, to delay, sigh, spoke long (due to regular intake of breath), become extended/long/increased, Soul/spirit, intellect/reason/mind, inner desire or feeling, pride, self-magnification, nafs – soul of discrimination (mental) and ruh – soul of breath (physical), oneself/itself, whole, a person/being/individual, Brother or co-partner in faith/religion/relationship, Wide space, distance, Greatness, hidden reality which is beyond human perception etc.

Teaching children about the etiquettes of entrepreneurship, trade and business, this hadith is a great start! If your kids are small, you can use it in terms of general deception:

{ Translation: “Do not not cheat one another” }

Najsh is to offer a high price for something in order to allure another customer who is interested in the thing.

The word “Tanaajashu” has been derived from three root words ن ج ش (Nun-Jiim-Shiin) which means to conceal, hide intention, rouse, ensnare, to scare from one thing to another, to lie, to capture, to collect camels after the state of dispersion etc.

This word has not been found in the Qur’an.

Ending it with teaching children about mutual respect and the essence of ummah (brotherhood, sisterhood or general humanity), you may say:

Najsh is to offer a high price for something in order to allure another customer who is interested in the thing.

The word “ikhwaana” has been derived from three root words أ خ و (Alif/Hamza-Kha-Waw) which means a person of the same descent/land/creed/faith with others; brother; friend; companion; fellow of a pair; kinsman; intimately acquainted. Signifying the relation of a brother – brotherhood/fraternity. Act in a brotherly manner. An associate/fellow. Sister, female friend. When it does not relate to birth, it means conformity/similarity and combination/agreement or unison in action etc.

If you or your kids memorize parts of these ahadith, please let everyone know in the comment section below how much time you or your kid took to learn them so others can also be encouraged to learn in shaa Allah!